Gold is certainly quite an interesting asset to watch as its volatility is rather substantial. However, the year 2015 has begun quite optimistically, with the price going up from 1183 to over 1300 in just a few weeks. Yet today we are seeing the price of 1071, the lowest price that was seen in the last 5 years. 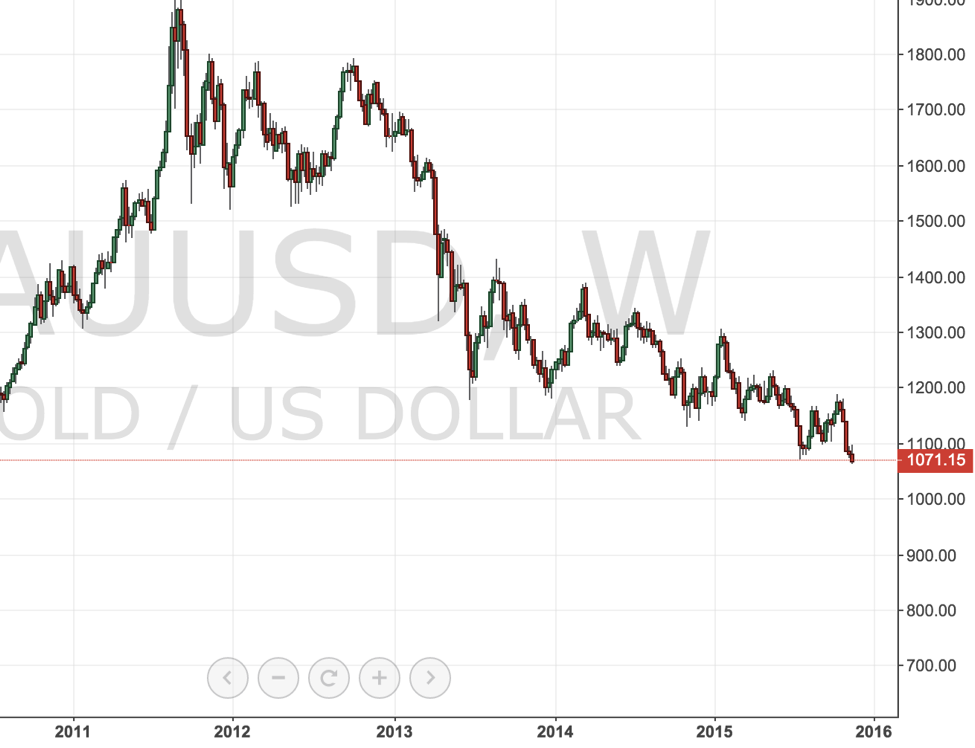 What has caused the downtrend of gold over the last 3 years and where will the price go in the year of 2016? Let’s find out below.

Gold is a commodity, meaning that it is not capable of generating interest rate returns. It is rather used as a safe haven investment in the times of uncertainty. While over the last 6-7 years investor were quite happy to allocate their funds into gold, currently, currently low interest rates suggest that other, better, opportunities are coming once the interest rates grow.

Next to this, Gold is quoted against Dollar, and this currency has certainly been on the rise recently. In other words, globally gold is purchased in USD, and, while the value of gold, for example in EUR, can remain roughly the same, it would still cost less in USD, as the currency has appreciated in the Forex trade.

Another important aspect is the decline in the growth of Chinese economy. While the country has been growing before 2011, the growth has stopped and this economy was needing gold less and less for the last 4 years. This has triggered a decrease in the demand for gold.

The predictions for the value of gold are not optimistic, this commodity is expected to go down as the factors contributing towards its growth are absent. The interest rates globally are forecasted to raise, hence the investors would see more reasons into placing their funds elsewhere. Next to this, the growth of USD is still expected, at least in the first half of 2016. So far there were not positive news coming from China, so it is not expected that the demand for gold from this country will rise too.

An important factor to consider is the mining costs of gold. In some countries, mining gold that is valued at lower than 1000 USD could become not profitable. This is why we can expect some decline in the supply, yet it is not likely to contribute towards the increased value of gold, it would rather decrease the speed of the decline.