20 November, AtoZForex.com, London – As market prices high odds for the Fed to increase interest rates at the December FOMC meeting, Bank of America Merrill Lynch shifts the discussion to the 4 Fed steps for December hike as opposed to when.

The 4 Fed steps for December hike

When the Fed will increase interest rates Bank of America Merrill Lynch expects the central bank to:

Third, provide details and guidance for the expected usage of term tools in the normalization process.

Forth, continue reinvesting proceeds from their Treasury, MBS holdings, and agency debt.

Table 1 illustrates each of the tools the Fed might use and provides some background information on those instruments.

Short term currency market rates should move higher in response to the first US interest rate hike in almost a decade, though a fair amount of variation will also likely be among the move. (see Chart of the Day). 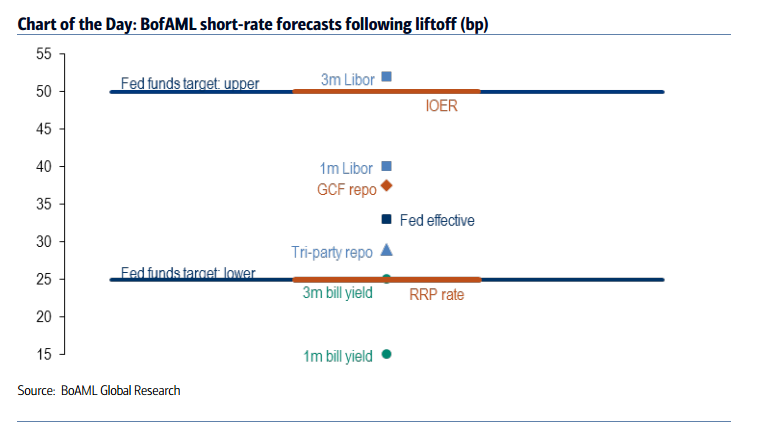 “We expect that the fed funds effective and Treasury general collateral repo rates will trade in the lower half of the IOER to ON RRP band,” Bank of America Merrill Lynch notes adding that,” short-dated bills and agency discount notes will trade near or below the ON RRP level while three-month LIBOR will likely settle at or slightly above the IOER rate.”

However, given the fact that the Fed has not increased interest rates since 2006, a fair amount of uncertainty surrounds the forecasts and it might take the currency markets some time to settle into the new trading levels.

“Year-end liquidity dynamics may also add volatility to the front end after the first Fed move,” Bank of America finished.