Texas to ban anonymous crypto transactions according to a bill proposed by a member of the House of Representative. How have digital currency advocates reacted to this latest move?

March 11, 2019 | AtoZ Markets – A Republican member of the House of Representative, Phil Stephenson has introduced a bill that would require cryptocurrency users to identify themselves. The bill number 4371 requires a person receiving payment with cryptos to first verify the identity of the person sending payment.

However, the bill outlines that verification would not be required “if the payment is sent by a “verified identity digital currency“.

As per the proposed house bill, a verified identity digital currency is defined as “a digital currency that allows the true identities of the sender and the receiver to be known before a person has access to another person’s digital wallet.”

While the bill does not include a list of examples of what constitutes verified identity digital currency, it does, however, note that it will spread awareness and promote the use of it with the collaboration of Texas Department of Banking, Credit Union Commission, Texas Department of Public Safety, and State Securities Board.

These aforementioned agencies would also collaborate to provide tools for people to identify which digital currencies are acceptable or not, educate law enforcement agencies on cryptocurrencies. If the bill is adopted, Stephenson’s proposals will take effect from September 1, 2019.

Not everyone seems to have accepted the proposed bill to ban anonymous cryptocurrencies as it has been criticized by the crypto advocates in Texas as well as in the country. Stephenson’s move seems to attack the basic principle of cryptocurrencies i.e censorship resistance. According to a Twitter user, Peter Van Valkenburgh has referred to the bill as “very oddly drafted”. 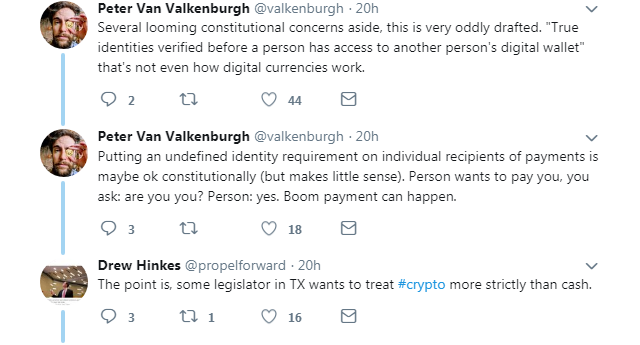 Also, Andrew Hinkes, co-founder of Athena Blockchain have raised salient questions on why such a move could hamper the growth of crypto:

“Would any existing cryptocurrency or digital currency qualify as a ‘verified identity digital currency’ as defined? What level of ‘ID’ is required to be ‘verified’? State issued? Are four state administrative bodies the right entities to ‘promote’ a digital currency?”

Moreover, a non-profit organization, Texans for Fiscal Responsibility has given the Stephenson’s proposed bill a 40 percent rating, which is quite low for a Republican lawmaker.

Texas is not alone to attack the privacy of the cryptocurrencies. As reported by AtoZ Markets, Eric Woerth, the head of the Finance Committee of France’s National Assembly suggested a ban on anonymous cryptocurrencies. He stated;

“It would also have been appropriate to propose a ban on the dissemination and trade in [cryptocurrencies built] to ensure complete anonymity by preventing any identification procedure by design. This is the case for a certain number of [cryptocurrencies] whose purpose is to bypass any possibility of identifying the holders.”

In April of 2018, Japanese regulators made a similar suggestion of preventing cryptocurrency exchanges from trading anonymity-oriented altcoins like Dash and Monero.

An unnamed member of the country’s regulator the Financial Services Authority (FSA) stated that it should be seriously discussed as to whether any registered crypto exchange should be permitted to use such currencies.

Tags Cryptocurrency regulation France Marshall Islands
Forex Crypto
Top 5 Forex Brokers
Top 5 Crypto Exchanges
Your subscription could not be saved. Please try again.
Thank you for subscribing. You will be the first to receive all the latest news, updates, and exclusive advice from the AtoZ Markets experts.
Everyone is reading
Top 5 Forex MT5 Indicators for 2021 you should try
Top 5 Cryptos to Watch in Quarter 2 2021
Bitcoin Facing Resistance Around $60,000 Event Area - What Next?
close ×