According to a Whale Alert announcement, stablecoin operator Tether by accident has minted and subsequently burned 5 billion USDT tokens.

July 15, 2019 | AtoZ Markets – Tether (USDT) is one of the most popular stablecoins with the mirror the value of the US dollar. According to the site, Tether converts cash into cryptocurrency to anchor or “tether” to the price of national currencies like the US dollar, the Euro, and the Yen.

As per a research carried out by Diar, the stablecoin is skyrocketing in the Asian markets, especially in China, which has the largest Tether trading volume in 2019.

According to Whale Alert which detects large crypto transactions, 50 million USDT tokens were transferred from US cryptocurrency exchange Poloniex to the Tether Treasury via the Omni protocol on the Bitcoin (BTC) blockchain.

By today, the Poloniex exchange is offering trades in 68 cryptocurrencies. It is among the largest cryptocurrency exchanges on CoinmarketCap. The exchange is trading a total of almost $140 million daily.

Whale Alert tweeted, that Tether Treasury minted 5 billion USDT tokens on the Tron blockchain, after which it burned them.

Later, the stablecoin operator minted another 50 million USDT on the same chain. It burned another 4.5 billion USDT, and finally transferred 50 million Tron-based USDT tokens to a wallet presumably belonging to Poloniex. 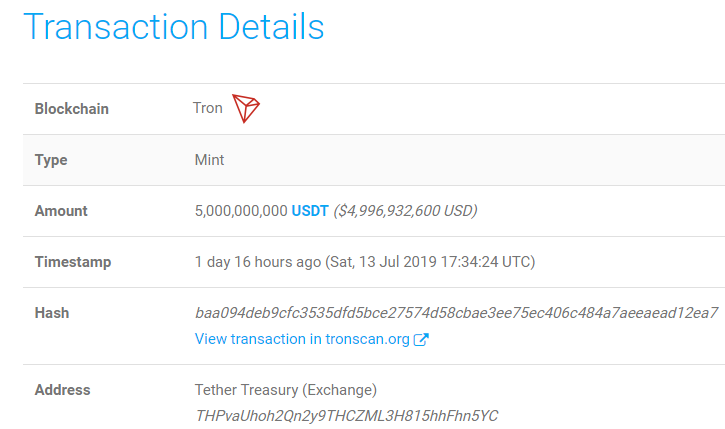 CTO Paolo Ardoino explained that they perform a swap of 50 million Omni-based USDT tokens to the Tron blockchain. But they made a mistake with the decimals. 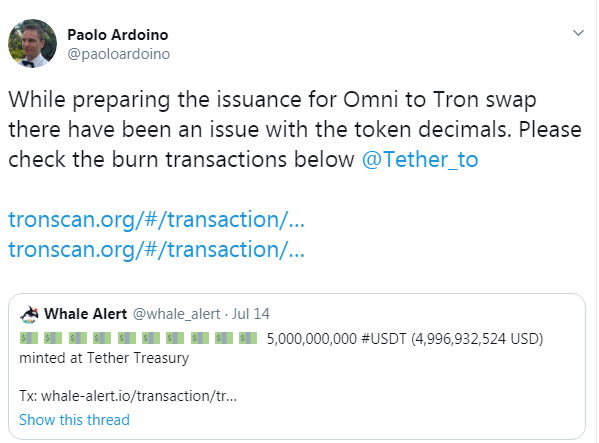 Tether’s Partnership with Bitfinex Affects Its Activity in the US

There have been some controversies with Bitfinex and its partner, Tether, from the New York Attorney General’s (NYSAG) office in the last few months.

According to the latest NYSAG allegations against Tether and Bitfinex, the crypto trading platform provided its service to several New York and US-based traders, although, in 2018, said it would no longer offer to trade to such clients.

Moreover, as per US authorities, the defendants used tether funds in an unethical way to cover theirs loses.

In May 2019, New York City Supreme Court, restricted Tether, from using its reserves to cover Bitfinex $850 million losses. Judge Joel M. Cohen also ordered both firms to submit documentation regarding the issuance of a loan and a line of credit.

On July 2, Bitfinex announced in that it repaid $100 million of outstanding loan facility to Tether. As per the announcement, the crypto exchange made the repayment via wire transfer to Tether’s bank account.

But, Bitfinex reportedly decided to complete the prepayment based on its financial position.

Tags Bitfinex Stablecoin Tether token Tron
Forex Crypto
Top 5 Forex Brokers
Top 5 Crypto Exchanges
Your subscription could not be saved. Please try again.
Thank you for subscribing. You will be the first to receive all the latest news, updates, and exclusive advice from the AtoZ Markets experts.
Everyone is reading
Top 5 Forex MT5 Indicators for 2021 you should try
Top 5 Cryptos to Watch in Quarter 2 2021
Bitcoin Facing Resistance Around $60,000 Event Area - What Next?
close ×