After chaos hit the markets as a result of Swiss National Bank’s decision to scrap the 1.20 per euro floor which was set over three years ago, the immediate reaction was a sharp 30% plunge in the value of the EURCHF pair. 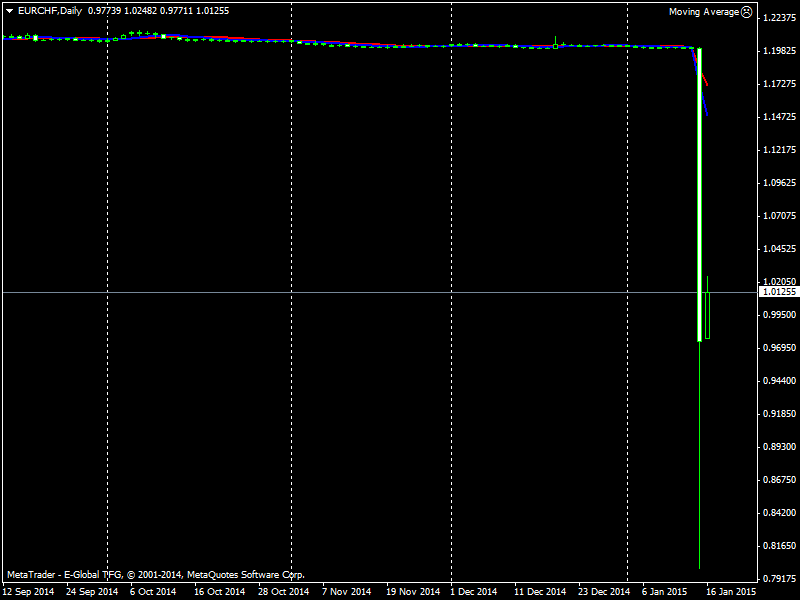 After the Swiss national bank unexpectedly scrapped its 1.20 floor, which was the minimum exchange rate limit since 2012 causing the EUR/CHF pair to tumble about 30% from 1.20 all the way down to 0.80 levels. Interest rates was cut to -0.75% and moved the target range for the three-month Libor further into negative territory, set between –1.25% and −0.25%, from the current range of between −0.75% and 0.25%. In the SNB press release, the Bank concluded that the overvaluation has decreased as a whole due to EUR/USD depreciation, consequently resulting in the CHF also to weaken against USD after an initial 12% plunge in the pair. We will be looking forward to seeing the effect of how the diverging policies of the Fed and SNB monetary policies will affect the USDCHF further. Swiss franc volatility meanwhile is expected to continue ahead of the upcoming ECB QE  program on the 22nd of January and the 25th of January Greek election. This might be the beginning of the end.

From Japan, the tertiary Industry Activity m/m which is a leading indicator of economic health – businesses are quickly affected by market conditions, and changes in their spending can be an early signal of future economic activity such as hiring, earnings, and investment. This came at 0.2%, slightly below the forecast of 0.3% but better than the previous figure of -0.1% and had no significant impact on the yen. The USDJPY has had a bearish week so far, carrying out the effect from the previous week’s downward movement. This strength of the yen against the dollar was encouraged by the Japanese Current account balance was announced earlier this week with better than expected results at 0.91T vs forecasted 0.69T.

Another decisive day for the USD with three high impact releases scheduled for the day. First we have the Consumer Price Index (CPI) which was negative last month at -0.3. Economists have forecasted that the -0.3 rate stays the same for this month. The CPI accounts for a majority of overall inflation. Also, the core CPI which is correlated to the CPI is concerned with the change in the price of goods and services purchased by consumers, excluding food and energy. This is forecasted for 0.1, in line with the previous release. Alongside this news, the Capacity Utilization Rate, Industrial Production m/m and Prelim UoM Consumer Sentiment also scheduled for the day. The Prelim UoM Consumer Sentiment is a high impact fundamental report watched by currency traders because it surveys about 500 consumers which asks respondents to rate the relative level of current and future economic conditions and therefore, a good signal of the level of financial confidence, which is a leading indicator of consumer spending, accounting for a majority of overall economic activity. This is forecasted at 94.2 as against the previous of 93.6. If the actual release comes at this figure or higher, then it shows that consumer confidence in the economy is growing. FOMC Member Williams is due to deliver opening remarks at the 8th Annual Economic Forecast Conference, in San Francisco and questions from the audience will be expected.