6 August, AtoZForex.com, Lagos – UK’s Services PMI, which is a leading indicator of economic health for the markets, showed that activity growth eased slightly. Yet, it remained strong, as the indicator came at 57.1%, which is against the forecast of 58.4%. According to the market report, the survey data continued to signal strong growth in the dominant UK services sector, moving into the second half of 2015. 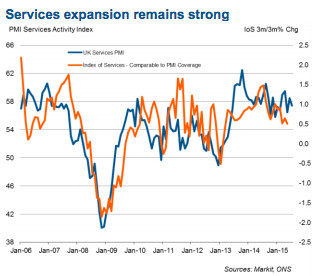 Growth of business activity remained sharp, despite easing slightly for the month of June 2015. Basically, this was in line with the trend pace over the past two-and-a-half years of continuous expansion. In contrast, new businesses rose at a faster rate, and growth of outstanding business resumed following June’s decline. The current sequence of job creation was maintained, even though at a bit slower rate. When assessing cost pressures, this indicator remained historically weak. However, firms have raised their own prices, coming in at the strongest rate in five months.

The readings came above 50.0, signalling a growth of activity compared to the previous month, and below 50.0 contraction. The Business Activity Index fell to 57.4 in July, compared to the previous month of 58.5 for June 2015. In overall these figures displays the growth of activity for the thirty-first successive month, and at a rate that was broadly in line with the strong average over the sequence. That said, it was slightly weaker than the trends shown for both the first (57.6) and second (58.2) quarters of 2015. Having reviewed these releases, evidently GBP remained strong against most of its major counterparts.

ADP NFP and other US data disappoint

The US ADP Non-farm employment change showed 185,000 jobs added in the past month. As investors and traders seek clues in as for the timing of Fed rate hikes. Hence, this may be interpreted by some, to mean that there will be an impending slowdown in the main Non-farm payroll report on Friday. Potentially, resulting in a push back in the timing of rate hikes by the Fed.

Last week, the wage report also showed a slowdown in wages. Another negative for the employment sector, which has been displaying solid gains for the past three months. The US trade balance displayed that the goods and services deficit was at $43.8 billion in June, up $2.9 billion from $40.9 billion compared to the month May. As for June, the increase in the goods and services deficit reflected an increase in the goods deficit of $2.9 billion to $63.5 billion and a decrease in the services surplus of less than $0.1 billion to $19.7 billion.

Year-to-date, the goods and services deficit increased $1.6 billion, or 0.6 percent, from the same period in 2014. Exports with decreased $33.4 billion or 2.9 percent. Along with it, imports decreased with $31.8 billion or 2.2 percent. Also, the US ISM Non-Manufacturing PMI came at 60.3, as the economic activity in the non-manufacturing sector grew in July for the 66th consecutive month.

Having this said, the stronger dollar has made goods relatively more expensive, and weak demand overseas are weighing on manufacturers. All in all it prevented the world’s largest economy from gaining momentum. Attention remains fixed on tomorrows NFP data to determine the immediate direction of the dollar.

Canada’s Trade Balance showed the lowest deficit since December 2014. Canada's exports increased 6.3% in June while imports declined 0.6%. Hence, its merchandise trade deficit with the world narrowed from $3.4 billion in May to $476 million in June. The Cad reached a six year low against the dollar as the countries economy weakens from the effect of lower oil prices.

Australia’s unemployment rate increased 0.3 percentage points from a revised June estimate to 6.3% in July 2015, while the Employment Change came at 38.5k. the number of unemployed persons increasing by 40,100 to 800,700,   the number of employed persons increasing by 38,500 to 11,810,700, and   the participation rate increasing 0.3 percentage points to 65.1%. The Aussie fell after the report as markets weighed largely on the disappointing unemployment figures which was forecast to remain at 6.1%.

Finally, Super Thursday is here. It’s a big day for the pound as we have a host of serious economic reports, starting with the Manufacturing Production m/m. The major emphasis though is the MPC official bank rate votes, official bank rate with the accompanying MPC rate statement and BOE Inflation report, with BOE Gov Carney also scheduled to speak.