Event
Add your event to our
directory.
Get Free Trading Signals Your capital is at risk.
November 20, 2018, AtoZ Markets – A recent study funded by both the Canadian government, and the University of British Colombia (UBC), shows that Initial Coin Offering (ICO), are undergoing regulatory restrictions, the study identified as “compliance trilemma.”
Over six months, the research team investigated in their study the ICO venue, with emphasis on areas like North America. In addition, they were also scanning some other countries and regulatory systems.

From financial, legal, and scientific backgrounds, the research team interviewed 45 qualitative individuals involved in the ICO campaigns. It is to delve into the issues that find as prominent in the industry.
The interviews resulted in that ICO issuers face a “trilemma”. That they can work on two objectives at a time, out of three, as per the study.
Those three objectives are “having a compliant offering,” “reaching a distributed pool of investors,” in a cost-effective way. In return, the term “compliance” as the process of following the regulations. It set by both the issuer and the investor in the home jurisdiction in which the ICO campaign runs.
The pool of investors regard as the core. That contributes to an ICO when it comes to how the campaign is funded. Complying with the financial regulations imposes a high cost if the investors become more distributed.
“If issuers forgo these costs, the risk of being non-compliant rises significantly. The result is a trilemma. Whereby issuers currently must forgo one of these goals to realize the other two, or to compromise on all three”. It explained in one of its paragraphs. 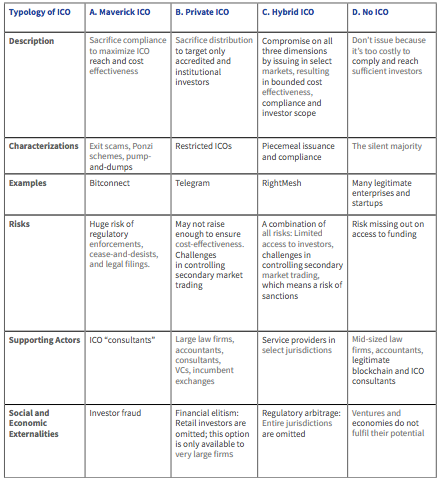 In the research, the team uses the term “trilemma” to reveal four basic approaches connected with ICO issues. “The Maverick ICO,” refers to not responding to the compliance for a better reach of ICO. And cost-effectiveness, wherein a noticeable risk of regulatory enforcement poses due to such practice.
The second approach is “the Private ICO.” In which the focus is on targeting accredited and institutional investors by sacrificing distribution. The thing that might bring a high chance of not effecting cost-effectiveness, while it is likely to pose challenges controlling the secondary market trading.
And the third approach is the Hybrid ICO. It compromises on all of the three dimensions by issuing in specific markets. That gives consequently results in bounded cost-effectiveness, the compliance provision, and the investor’s scope, which altogether pose multiple risks.
The study found that what was a “trilemma” affects ICOs. And what pushes investors back from the industry. Therefore, That imposes more confusion in understanding how they can comply with the regulations.
“To date, a trilemma has hampered the ICO that has substantially limited its potential… Many actors with legitimate ventures that could benefit from ICOs are likely holding back. Because of that, they confuse over how exactly they might comply with financial regulations within and across jurisdictions. And they also confuse over the prohibitive costs of doing so manually.”, concluded the study.
Tags Compliance ICO Regulations risk
Top forex indicators
Automatic MT4 supply and demand indicator
Review and download
Mostafa Belkhayate trading system
Review and download
Automatic Double Top finder indicator
Review and download
Broker of the month