March 04, 2019, AtoZ Markets  - As the crypto market continue to drop to low levels with almost all digital currencies at all time lows, it seems that investors are moving towards the stable coin. Most of the investors use Tether (USDT), TrueUSD (TUSD) and Gemini Dollar (GUSD) to keep the assets during high volatility and bearish market times.

These are growing like there's no tomorrow and it will only be a matter of time before the US SEC will turn its attention to this class of digital assets.

It is noticeable that the days of regulatory uncertainty when regulators around the world were only trying to understand the concept of cryptocurrencies. The legal frameworks to which they should be regulated are long gone. Moreover, the U.S. financial regulators seem to be figuring out to classify and how to regulate cryptocurrencies.

So Far, the stablecoins have largely avoided public scrutiny and criticism from agencies like the Securities and Exchange Commission (SEC) and the Commodity Futures Trading Commission (CFTC). Yet, as stablecoins see greater capital inflows and industry adoption since the crypto market boom in late 2017 and early 2018, the SEC and CFTC will take a harder look at their compliance standing.

Stablecoins has the same benefits as other cryptocurrencies like cheaper transactions and rapid settlement but with low or “near to zero” price volatility which usually found in the crypto markets. Through that, stablecoins satisfies the demand for major fiat currencies in parts of the world with limited access to the global financial system.

Till now, the most popular stable coin is Tether (USDT), which is the fifth largest cryptocurrency in the world, by market cap. There have been worries that stablecoins is not backed by the USD because the institution has not yet agreed to a transparent audit.

Each stable coin has a unique set of mechanisms, but they all work in the same way. They hold a guarantee of some type and manage the supply to help incentivize the market to trade the coin. For some, like USDT or TUSD, the concept is to hold actual dollars in reserve which can be redeemable for the token. For others, like Dai, they hold the coin in reserve and have a lending mechanism.

Stability should be viewed as a major concern for stablecoin and the value of any market resource is changing based on the demand. When volatility is up or inflation increases, the demand for stable asset would increase, and when volatility is decreasing and there is no threat of inflation, thus demand for stability goes down. The crypto market forces make stablecoins more stable, it regulates its supply and makes such assets productive.

A good example of a stable asset is gold, and gold price moves around. It is determined by market forces and alleged stability of the global financial system. The US Dollar and Euro is another example. It’s ironic that many stablecoins are trying to target a price equal to $1, but the price of the dollar itself moves around or against other currencies. The stability of the US Dollar or gold price does not come from targeting a specific price. A dollar is relatively stable as compared to other currencies of the world because it powers the US economy, the biggest and most stable economy.

The US SEC might characterize them as “demand notes,” which are traditionally defined as two-party negotiable instruments obligating a debtor to pay the noteholder at any time upon request.

According to the Supreme Court’s 1990 decision in Reves v. Ernst & Young, demand notes are presumed to be securities under Exchange Act Section 3(a)(10) unless an exception or exclusion applies.

For its part, the CFTC might take the position that stablecoins are “swaps” under Commodity Exchange Act Section 1(a)(47)(A). That provision defines swap to include an “option of any kind that is for the purchase or sale, or based on the value, of 1 or more interest or other rates, currencies, commodities, or other financial or economic interests or property of any kind.” 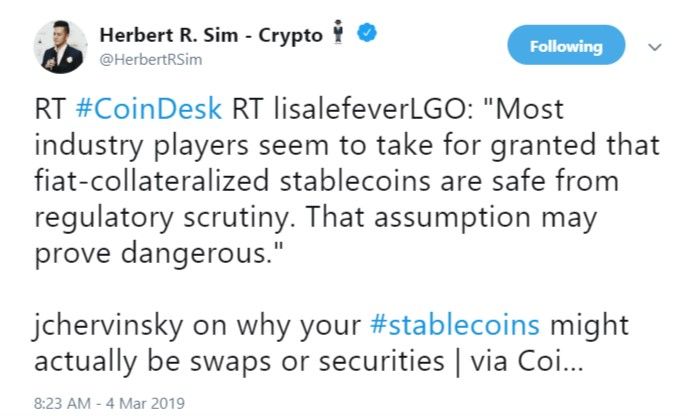 In conclusion, anyone who issues or uses stablecoins should give considerable thought to their potential risk under U.S. SEC and CFTC laws.