The crypto enthusiasts believe that the main reason for BCHSV expulsion is the close relationship of the Japanese exchange with the BSV camp.

BCHSV withdrawal from the exchange is for late June 2019. But “a detailed schedule for the abolition will be announced by the end of April.” In a recent press release on April 16, SBI Virtual Currencies states that.

In the document, the Japan-based crypto exchange explained that BCHSV holders could sell their coins by the end of April. And by the end of May, the coins will be sent to CooXWallet, which will serve as a “customer-controlled hardware wallet.”

The company’s press release states that the BCHSV transactions through the SBI have “suspended,” but the sale of the deposit will continue. SBI Virtual Currencies reports that details regarding the cancellation of the sale, the conversion rate, and the date of payment will be revealed later this month.

“This material is not part of the rules for the management system of Japan Virtual Currency Exchange Business Association.” SBI press release says that.

The company named in the document three reasons why they decided to exclude the fourth-largest by market capitalization cryptocurrency from their list, including:

The exchange also emphasizes that Bitcoin Cash forking will happen in the future. It also might have an impact on the exchange. Back in November 2018, the coin split into BCHABC and BCHSV. A significant drop in the global coin market also occurred. That reduced the capital market capitalization by more than $ 100 billion in less than a month.

The Crypto Community Reacts to the SBI Decision

SBI refers to market capitalization, vulnerability to a 51 percent attack. Also, Bitcoin Cash volatility is the main reason for which it delists BCHSV. However, the crypto community suggests that there might be a more personal cause behind this decision. SBI Virtual Currencies delists Bitcoin Cash due to the exchange’s close ties with nChain, the main initiator of BSV, and Craig Wright. Koji Higashi, a co-founder of IndieSquare Inc., suggested that. 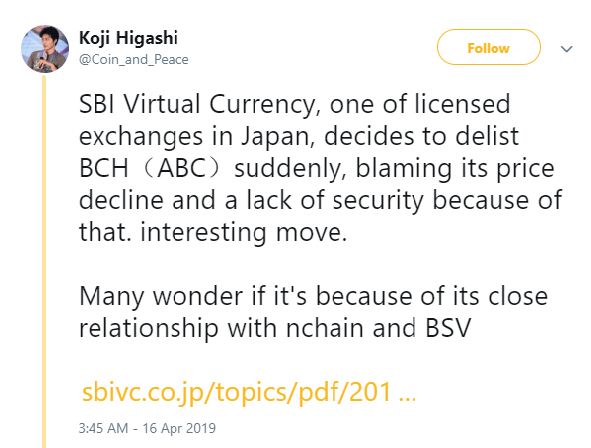 The media reports that BCHSV rose 6.31 percent against the dollar. But Bitcoin SV experienced a significant drop of 21.26 percent. It happens after Binance and Shapeshift delisted it. And Kraken hinted at the same.