Get VIP Trading Signals Market Watch
Trade Now Your capital is at risk.
SBI Crypto, the mining subsidiary of Japanese financial conglomerate SBI Holdings, has announced the availability of its bitcoin mining pool service to the general public.


March 19, 2021 | AtoZ Markets – SBI Crypto, a wholly-owned subsidiary of Japan's SBI Holdings, has opened its bitcoin mining pool for the public. SBI Crypto has been mining cryptocurrencies in businesses outside of Japan since 2017 and is now opening its services to users, according to a press release.

Since March 19, they have been able to join the pool through a request to open an account. From April, the company will simplify the service subscription procedure.

“While many of the features developed are targeted at institutional clients, the service is also available to individuals,” the statement said.

SBI Crypto uses its current hash rate of 1.1 EH/s to ensure the stability of the pool.

SBI Crypto Pool accounts for 1.6% of the total computing power of the Bitcoin network, according to BTC.com. With a hash rate of around 2.4 EH/s, it ranks 11th in the pool ranking. 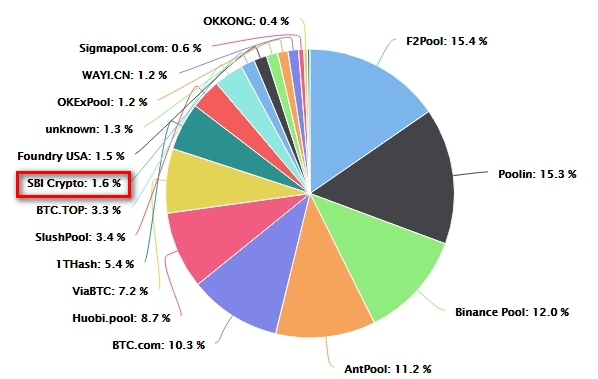 An external security audit of the mining service was conducted by Silent Break.

SBI noted that part of the pool's services was developed in addition to the data center management service as part of a strategic partnership with Northern Data AG.

Previously, SBI Holdings acquired TaoTao, which operates a cryptocurrency exchange under the umbrella of Z Holdings to step up its customer base expansion.