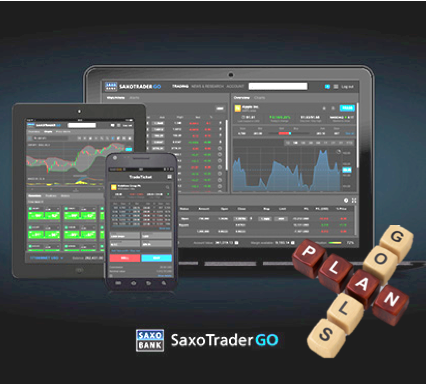 From the earlier released announcement about the new product launch of Saxo Bank, made on the 27th of March, more details have been revealed upon the Saxo Trader GO. As the Danish Bank already has just initiated the launch of its upgraded trading platform on the French market, it is expected that their clients in the UK will be able to utilize Saxo Trader GO from the 25th of May. After this roll-out on the French and UK market, gradually the new product will be become available across the world.

With Saxo Bank’s introduction of TradingFloor.com over last year, its has been long over due, since a significant update has been announced by the Danish bank. From the previous article upon the launch of Saxo Trader GO, only a few details were disclosed upon the updated platform. However, Saxo Bank has recently unveiled a bit more information upon the Saxo Trader GO platform, specifically on last Monday in Paris. Aside providing more information on the new trading platform, the Danish bank has introduced its strategic plan for the upcoming period, clarifying its entirely new ecosystem for the 21st century banking.

Basically, the first steps of the bank have been laid with the integration of last year TradingFloor.com and the recent Saxo Trader GO strategy. In summary the new trading multi platform boasts a modern technological transition between various trade services, whilst having an intuitive user interface with multi-asset trading made available. The HTML 5 based product ensures full transition between mobile and desktop, while being able to trade from charts with push notifications. Noteworthy, is that the new trading platform has been developed working closely with the feedback of Saxo Bank’s clients, making it therefore an unique product.

The aim of these two products is destined to democratize trading, and together with the TradingFloor.com hub, which allows Saxo Bank’s clients to have their accounts available across a virtual trading floor, the Danish bank has already made their initial steps towards the ecosystem goal. Eventually, the Danish bank plans to position itself as an innovator between the traditional financial institutions and the rapid changing needs of their clients in the new century.

Alert: Yellen Calls for Urgent Action to Raise the US Debt Limit
Forex Crypto
Top 5 Forex Brokers
Top 5 Crypto Exchanges
Your subscription could not be saved. Please try again.
Thank you for subscribing. You will be the first to receive all the latest news, updates, and exclusive advice from the AtoZ Markets experts.
Everyone is reading
Ripple Agrees to Provide SEC with Company Records
Cryptocurrency Market-Experts Make New Predictions
FCA Publishes New Strategy to Scams and High-Risk Products
close ×