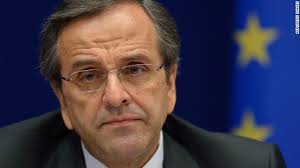 6 July, AtoZForex.com, Lagos – Another casualty of the dominance of the “no” votes in the Greek referendum has surfaced. Greece’s conservative opposition chief Antonis Samaras announced his resignation after Athens bravely chose to reject further austerity cuts in Sunday’s referendum.

Results show sixty-one percent of voters backed Prime Minister Alexis Tsipras’ idea of saying no to further spending cuts and tax increases which has taken the country to the brink of financial collapse. Samaras’ New Democracy party had campaigned for a ‘Yes’ result in Sunday’s referendum, warning that a rejection of EU-IMF reform proposals could see Greece crash out of the Eurozone. Again standing against Syriza’s bid for “no”, in rejection of further austerity measures from the creditors.

Having been ousted in the January election as prime minister, at that time, the 64 year old Samaras was faced with calls to resign as the party leader after the loss to the radical leftist Syriza party of Prime Minister Alexis Tsipras. “I understand that our great movement needs a new start. From today I am stepping down from the leadership,” the New Democracy chief and former prime minister, said in a televised address.

Also, even after this result, the finance minister, Yanis Varoufakis has decided to resign his position, saying that his presence would work against his country in further negotiations with the European heads. This was stated on his personal blog: “I consider it my duty to help Alexis Tsipras exploit, as he sees fit, the capital that the Greek people granted us through yesterday’s referendum,” said Varoufakis, 54, referring to the body of euro-area finance chiefs that led aid talks. “And I shall wear the creditors’ loathing with pride.”

The European Central Bank meets today to discuss extending a new lifeline to Greek lenders, as the Athens looks to lift capital controls which have been in place for a week, imposed by Tsipras to stem withdrawals.

Obviously, the creditors are not pleased with Greece’s decision of rejection. Tsipras has “torn down the last bridges across which Europe and Greece could have moved toward a compromise,” German Vice Chancellor Sigmar Gabriel said in an interview with the Tagesspiegel newspaper. German Chancellor Angela Merkel and French President Francois Hollande called for an emergency leaders’ summit scheduled for Tuesday. The two leaders will meet today in Paris at 6:30 p.m. to discuss Europe’s next move.