As per different media resources, Roger Ver aka “Bitcoin Jesus” a well-known investor in Bitcoin startups, has been recently denied a tourist visa to Australia by the Australian Embassy in Japan.

25 July, 2019 | AtoZ Markets –  It is worth mentioning that this is not the first incident when Roger Ver gets denied a visa to visit other countries. “Bitcoin Jesus” who publicly gave up his US citizenship in 2014, was denied USA non-immigrant visa in 2015. Thus, Ver could not attend the North American Bitcoin Conference in Miami from 16-18th January.

Roger Ver Denied A Visa to Australia and the USA

Back then, it was the third time when the Bitcoin investor received a negative response from the US Embassy. Against the background of the event, the “Bitcoin Jesus” tweeted the following message to his 18,800 followers:

During one of his interviews that time, Ver stated, that embassy rejected his application three times at $160 per application. Officials have refused to examine documentation and evidence he provided to support his case. Ver was permitted to apply again from scratch.

Ver left the United States nearly nine years ago. It was after serving a 10-month prison sentence and a three-year trial period for selling agricultural firecrackers online.

Since then, the crypto investor has lived mainly in Japan and has not visited the USA for almost a year

Is It A Bad Year for Roger Ver?

The “Bitcoin Jesus”, with whom Atoz Markets has recently held an interview. He is also known for his recent conflict with the notoriously famous self-proclaimed Satoshi Nakamoto Craig Wright. Wright sued Ver in May 2019, for calling him a fraud and a liar in a YouTube video.

According to the media, Craig Wright sued the “Bitcoin Jesus.” It is because of the video that he posted on the official Bitcoin.com channel on YouTube on 15 April.

In a video entitled as “Special Report to Craig Wright,” Ver called Wright a liar and a fraud and offered to sue him again.

Thus, Wright’s lawyers sent a warning to Ver and Bitcoin.com, if “Bitcoin Jesus” did not agree to apologize publicly for his accusations against Wright, a lawsuit would follow.

The official note from the Australian Embassy in Japan that Ver posted in his Twitter reads :

Due to latest visa denial the “Bitcoin Jesus” will not be able to attend the BitcoinCash City conference in Australia. It takes place in North Queensland from 4-5th September. Roger Ver shared this information in his tweet, which reads : 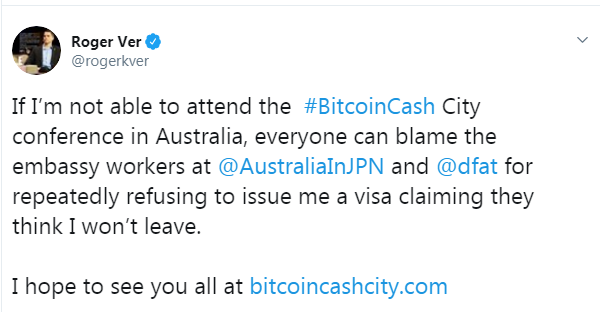 SGX Expands Forex Trading Reach with $171 Million Acquisition of MaxxTrade
Forex Crypto
Top 5 Forex Brokers
Top 5 Crypto Exchanges
Your subscription could not be saved. Please try again.
Thank you for subscribing. You will be the first to receive all the latest news, updates, and exclusive advice from the AtoZ Markets experts.
Everyone is reading
Is Forex Trading Illegal in India? Can Indians Trade Forex Legally?
XRP Skyrockets After Ripple’s ODL Announcement
Ripple Found Support Around $0.62 Price Area - Will Recover Upside?
close ×