15 December, AtoZForex – We are halfway through December and cryptocurrency market won’t stop surprising us. Following the new record highs from Ethereum and Litecoin, this time, Ripple has shown its potential. This silent (until now) cryptocurrency has literally exploded during the current week.

Thanks to the major movement, the Ripple has now shifted to the third place on the market cap list of top cryptocurrencies, leaving Bitcoin Cash behind.

Ripple Price Up Almost 100% – What drives the coin? 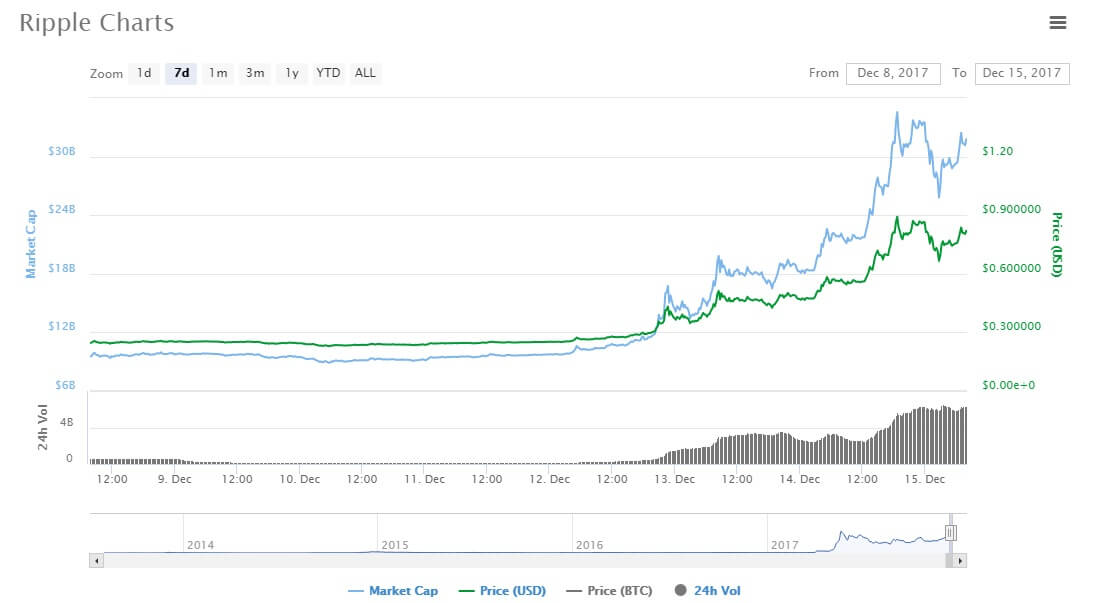 In the past 24 hours, the price of Ripple has increased almost 100%, while the volume of trading has accounted for US$6.44 billion.

Why did Ripple price rise so sharply?

There are several reasons for the price of XRP to surge so drastically.

Firstly, one of the key reasons for Ripple price rise is the news about banks in South Korea and Japan will be testing the cross-border payments utilizing Ripple system. The tests are scheduled to start today. The XRP tokens themselves will not be used in transactions, however.

The key aim behind the tests is to achieve the same-day worldwide fund transfers while simultaneously cutting costs by 30%. SBI Ripple Asia is a leader of a group of 61 Japanese banks that will be taking part in trials. As for the South Korean side, the Seoul-based Blockchain solutions provider will be responsible for the tests.

Another possible reason for the Ripple price to skyrocket is the mobile app payment powered by Ripple is to be presented live in just an hour from now on Japan’s “Nikkei Morning Plus” TV show at 5 p.m. ET.

Moreover, Ripple price rally could be fueled by the news that Ripple will be putting $55 billion of the existing XRP supply in escrow funds and create supply predictability of the tokens. Investors perceived this move as the consolidation of Ripple confidence in the market.

Finally, the fourth reason behind Ripple price surge is the deal it signed with Santander Bank and American Express to send international payments on its blockchain.

A reduction in available supply has fueled the interest in cryptocurrency along with other major drivers. As we saw Ripple price up almost 100%, it is still difficult to say what exactly is behind the rally. Some investors also speculate that Ripple might be added to Coinbase today.

In case everything works out good for Ripple and the global institutions will accept Ripple widely, we could see XRP price rise towards $2.00 level by the end of 2018.