Ripple price has slumped below 25 cents. The following looks at what could happen next based on the Elliott wave theory.

August 29, 2019 | AtoZ Markets – Ripple continued downside after spending over 24 hours oscillating within a narrow price range. The third-largest cryptocurrency has seen its trading volume also plummet and now only being supported temporarily by the 24 cents support level. The fast dip which has lasted more than 24 hours is not limited to Ripple. The entire market has shed over $20 billion in the last 24 hours. Ripple’s 24hr trading volume stands at $1.32 billion which is way below Litecoin’s $3.2 billion and significantly below Bitcoin Cash’s $1.62 billion. Ripple, however, remains the 3rd largest based on market capitalization according to data available on Coinmarketcap.

Looking back in time, Ripple was the best performer in the 2017 bullish trend. In fact, while most Cryptos including Bitcoin started the 2018 bearish trend in mid-December 2018, Ripple spiked to $3.3 from 27 cents in December 2017 and sustained a huge growth into the first three days of January 2018 before it finally succumbed to the general bearish market. At some point in-between the December surge, Ripple became the 2nd largest crypto and was not far from Bitcoin.

Coming back to the present, the Ripple project is now being questioned as it slumps far deeper than expected. After the 2018 bearish trend ended in December, most of the majors recorded significant gains ranging from 300% to 600%. XRP’s growth was however limited below 100% since the market bottomed in December. The 2nd half of 2019 has come bearish. However, most of the top cryptos still maintain a positive 2019 overall. Ripple, on the other hand, has dropped into the pre-December 2017 bullish breakout zone. Only being held by the 24 cents support level. A further dip could push XRP to the 12 cents support level.

In the previous updates, we identified a bearish impulse wave leg from 51 cents (2019 high) down to 25 cents and 20 cents as the chart below, used in the last update, shows. 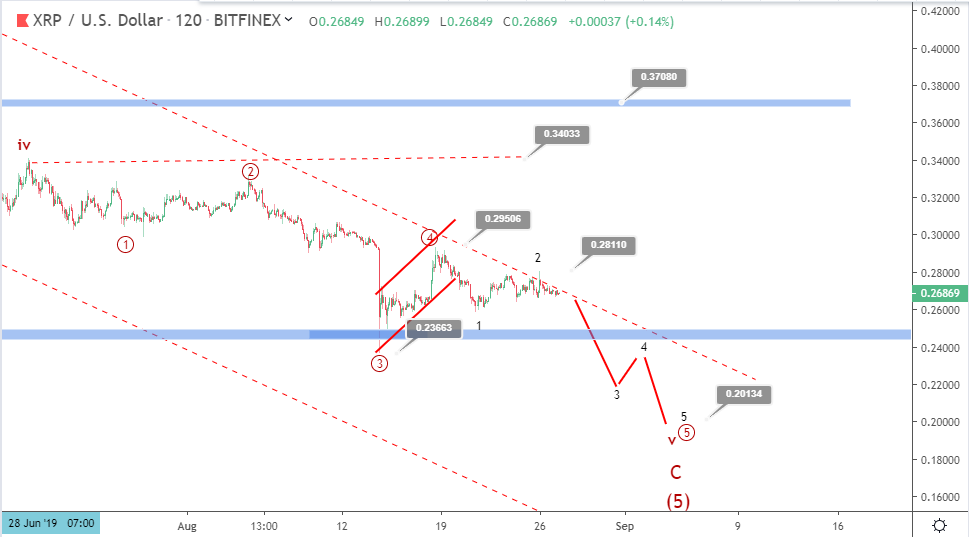 Price has now dropped to retest the 24-25 cents support zone. A breach below 24 cents is expected to happen eventually and cause further dip to 20 cents as the new chart below shows. 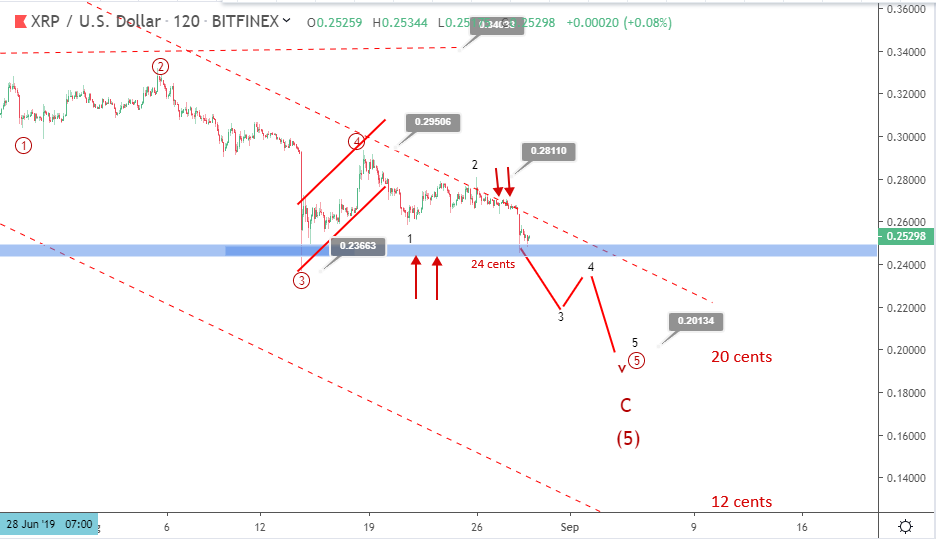 The next support level below 20 cents is at 12 cents. Will there be a big bounce? Time will tell.

Up or Down? Analysts Disagree on Where Bitcoin Will Go
Forex Crypto
Top 5 Forex Brokers
Top 5 Crypto Exchanges
Your subscription could not be saved. Please try again.
Thank you for subscribing. You will be the first to receive all the latest news, updates, and exclusive advice from the AtoZ Markets experts.
Everyone is reading
Can Ripple Break Below $0.55 Significant Event Level?
Ethereum Facing Support Around $2,300 Price Area - Will Strike Upward?
Danske Bank Rejects Cryptocurrency Trading
close ×