Ripple is retreating to 25 cents after a slight recovery. The following looks at what could happen next based on the Elliott wave theory.

September 05, 2019 | AtoZ Markets – XRP retraced from 24.5 cents to 25.9 cents at the closing days of August. The move continued to 26.7 cents on Tuesday. Currently, XRP is priced at 25.5 cents. So far in 2019 Ripple has become the weakest leg of the major Altcoins, surrendering a large part of its market share to Bitcoin. Ripple has lost up to 3 cents in 2019 so far while Bitcoin has gained around 160% in the same time frame.

Meanwhile, Ripple is slowing down gradually and it seems a really big upsurge is imminent. However, considering how low in confidence XRP investors are right now, it’s wise to think that an upsurge will be limited since there might be a lack of bullish momentum to push through. Despite XRP performance in 2019, it still remains the 3rd largest cryptocurrency based on market cap. However, its 24-hr trade volume has fallen behind BCH’s, LTC’s and even EOS’s.

Ripple sold 500 million tokens: will there be any damaging effect?

It was reported that Ripple transferred 500 million XRP tokens from its escrow wallet on 3rd September as part of the firm’s process of XRP sales. This has raised eyebrows and received heavy criticisms from XRP investors who are worried that the action might have led to XRP’s poor performance. It will be interesting to see how Ripple price gets out of the current mess. However, from the technical view, it seems another bounce will happen soon.

Currently, Ripple is heading to the 24-25 cents support zone. That will be the third time since August 14. If XRP breaks below this zone, we will most likely see a hit of 22 cents or even 20 cents. To the upside, there are minor resistance levels at 26.7 cents, 28 cents and 29.2 cents which must give way before the 34-37 resistance zone which somehow demarcates the bullish recovery from the current bearish trend.

In the last update, we figured that price was completing the bearish impulse wave from the 51 cents 2019 top with an ending diagonal ending a potentially truncated wave 5 of the 5th wave. The chart below was used. 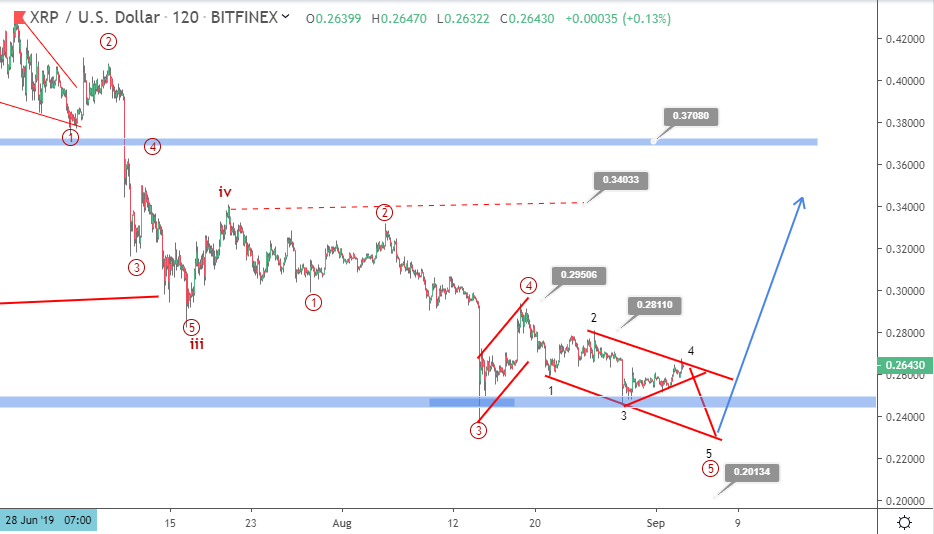 The price has now completed wave 4 of the diagonal and now going for wave 5 toward the support zone as the new chart below shows. 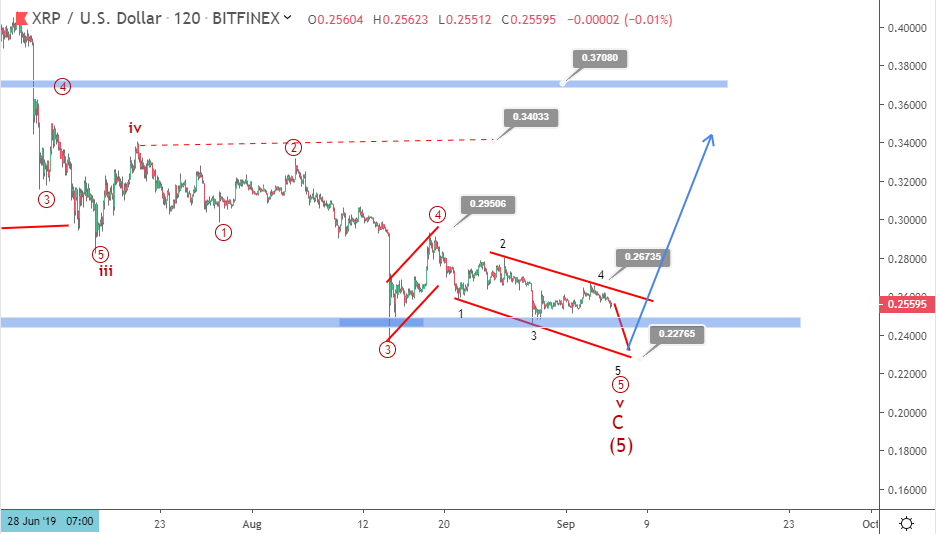 If wave 5 ends around 22 cents as expected, a break above the wave 2-4 line will most likely be followed by at least a 3-wave bullish correction to the 34-37 cents zone.