Ripple rallies to 36 cents today after another round of big surges were seen in the cryptocurrency market.

June 22, 2019 | AtoZ Markets – The cryptocurrencies are back. Such big surges that were seen in 2017 that took most cryptos to their all-time highs are happening again. The entire market capitalization has gained about $23 billion in the last 24 hours. Bitcoin spiked and gained about $1,000 in less than 24 hours to hit a new 2019 high at $10,700. This is the best so far in 2019 and the cryptos have surprised everyone including the addicted bulls. At the beginning of 2019, the average forecast for most Bitcoin bulls was $10,000 by the end of 2019. In less than half of the year, Bitcoin has surpassed this mark.

Among the top gainers, Bitcoin and Litecoin are sitting up there comfortably. Ethereum also hit $307 which is an impressive figure considering price exchanged for $82 in about 25 weeks ago. Ripple on the other hand, is still very slow compared other top cryptos. It is yet to surpass the 48 cents high recorded in May. However, it recovered from the 41 cents plunge seen earlier this week. Currently, the third largest cryptocurrency trades just a few ticks below 46 cents. A big surge above 48 cents toward 80 cents and $1 is still expected. Ripple continues to get endorsements and partnership deals but is yet to show that in its price activities.

Ripple Hodlers are probably frustrated now. The crypto has only surged about 63% since it bottomed in December 2018. Litecoin, Bitcoin cash and EOS have already hit over 500% while Bitcoin’s price has more than tripled. Meanwhile, a surge to 48 cents in May lacked build-up momentum to push to higher prices. Since mid-May, XRP has stayed sideways below 48 cents. A big breakout above 48 cents is expected. Further rallies first to 57 cents, then 80 cents and $1 should follow. Any price dip is expected to be limited above 37 cents. Meanwhile, a retest of 40 cents before the bullish move can’t be written off.

In the last update, we labelled a bullish impulse wave from the 28.5 cents. The chart below was used to show sub-wave (i)-(ii) completing. 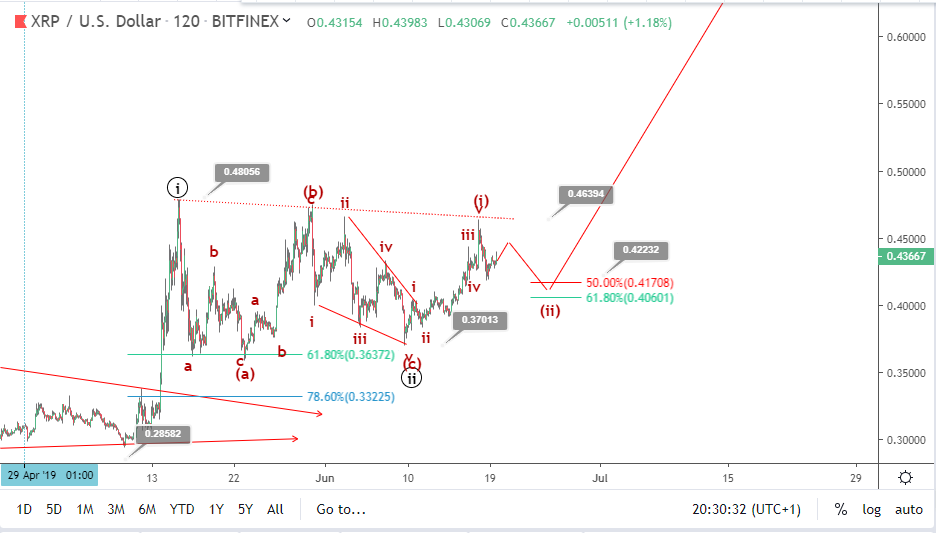 Wave (ii) seems to have ended after retracing to 50% of wave (i). However, wave (ii) might take one more leg to 40 cents before the breakout if price slows down after the current surge. The chart below shows price close to the 46-18 cents resistance zone. 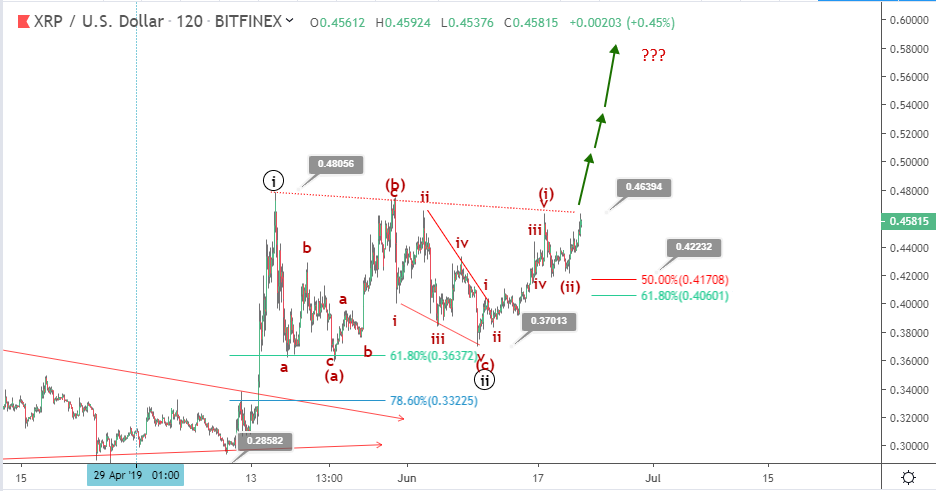 A quick bullish breakout should happen and push XRP to 80 cents to complete wave (iii). Ripple has stayed for long in the shadow. Maybe it’s time to make a really big show.