Ripple has lost all its 2019 gains as the crypto market plummets. Are there worse days ahead for Ripple? The following technical insight is based on the Elliott wave theory.

July 17, 2019 | AtoZ Markets – The cryptocurrency market has lost over $120 billion in just over three weeks. Bitcoin, Ethereum, Litecoin and other majors have shed over a third of the gains recorded in the first half of 2019. However, despite the current huge dips, most major cryptos still have significant gains in 2019 so far. There is a clear exemption – Ripple.

XRP is the third-largest cryptocurrency based on Coinmarketcap’s market capitalization rank with $13.48 billion. Among the top 10, Ripple remains the most disappointing cryptocurrency in 2019. In the first half of 2019, while many of the major coins in the top 10 recorded between 200% and 550% gains from the December 2018 lows, XRP only gained about 65%. Since December 2018 when it bottomed at 28.5 cents, Ripple spent over 75% of the time in a range and never surged to hit some of the critical 2018 swing highs. Currently Ripple exchanges for 31 cents after hitting the 28.5 cents low earlier. With the cryptocurrency bearish correction not yet over, XRP could dig deeper and hit its lowest since December 2017. 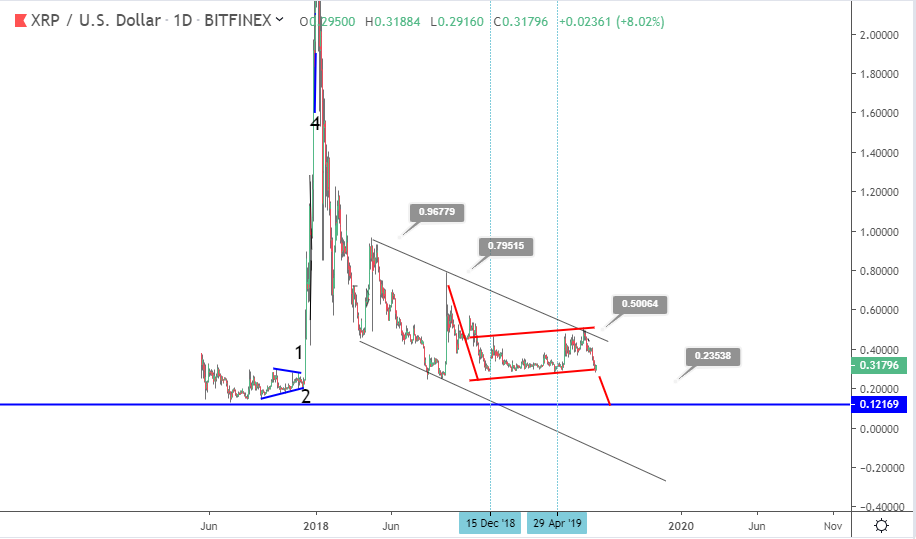 The daily chart above shows price returning into the bearish territory after the bullish push from 28.5 cents was resisted by a diagonal resistance level just below 50 cents. The whole structure still looks bearish with price knocking at the 23.5-28.5 cents support zone for the third time since late 2018. If a breakout happens below the zone, the next bearish target would be 12-15 cents. Will XRP crash this low? How far is the dip from 48 cents gone? 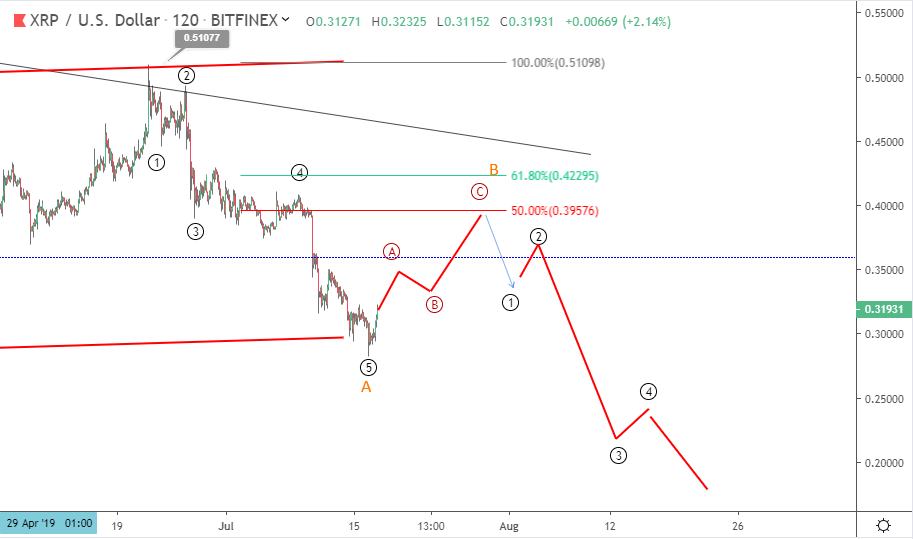 A simple A-B-C bearish leg could continue below 20 cents. The dip from the 50 cents top to test the 23.5-28.5 cents support zone is completing an impulse wave. The larger structure looks corrective and a 3-wave bounce to 39 cents- 42 cents could happen before Ripple crashes below 20 cents. Unless a massive rally happens above 50 cents, XRP’s worse days are still ahead.