Ripple has found a major or minor support just below 30 cent. It jumped upside and quickly gained 25% in two days. What next?

December 18, 2018 | AtoZ Markets – The cryptocurrency market surged a bit this week so far. All the top 20 cryptocurrencies listed on CoinMarketCap had a share of this market surge. Ripple rallied from 28.5 cent to 35.5 cent making 25% gain while Bitcoin, Ethereum and Litecoin gained 15%, 20% and 38% respectively. The gain has been maintained in the last 24 hours though price is dropping some of the gains gradually in the last few hours. The gain however, looks insignificant when compared to the large losses the market has had this year.

Bitcoin, Ethereum and other majors have been showing this sign since last week. Bitcoin and Ethereum were about to complete a bearish impulse wave after last month's bearish breakout. Bitcoin was expected to bounce at 2500-3000 support zone. Though price didn't thrust into this zone but the current push, if it continues, could lead to a higher 3-wave correction at least.

Ripple's price pattern has been much clearer that others. It looked like the much expected recovery would start from 30 cent. The chart below used in the early December Ripple forecast is still very much useful . 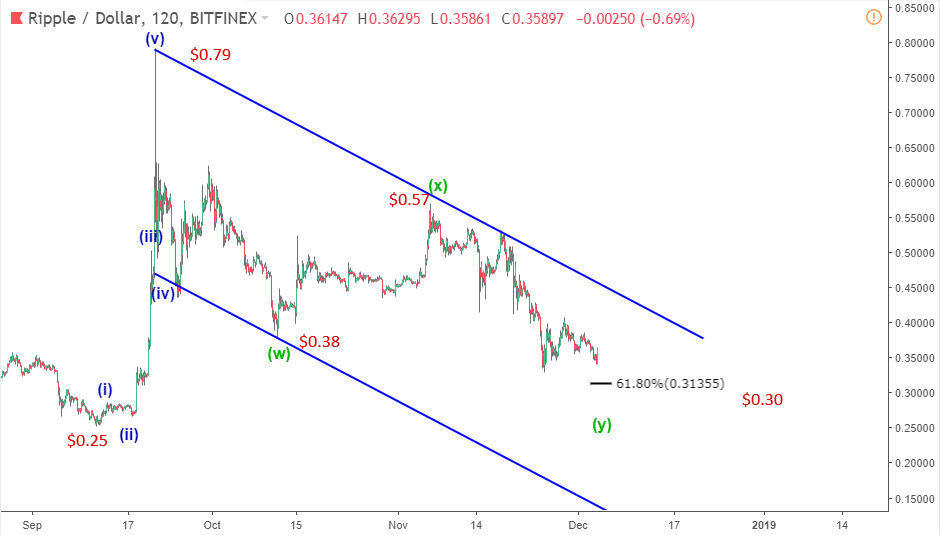 The drop from 79 cent was clearly corrective with the structure of a double zigzag pattern. At 61.8% extension of wave (w) from (x) ending at around 31 cent, I speculated that '25-30 cent is a very important support zone' and ''XRP will most likely hit 12 cent'' if it drops below 25 cent. Since price dropped to this support zone, it has moved sideways for more than a week before the current surge. 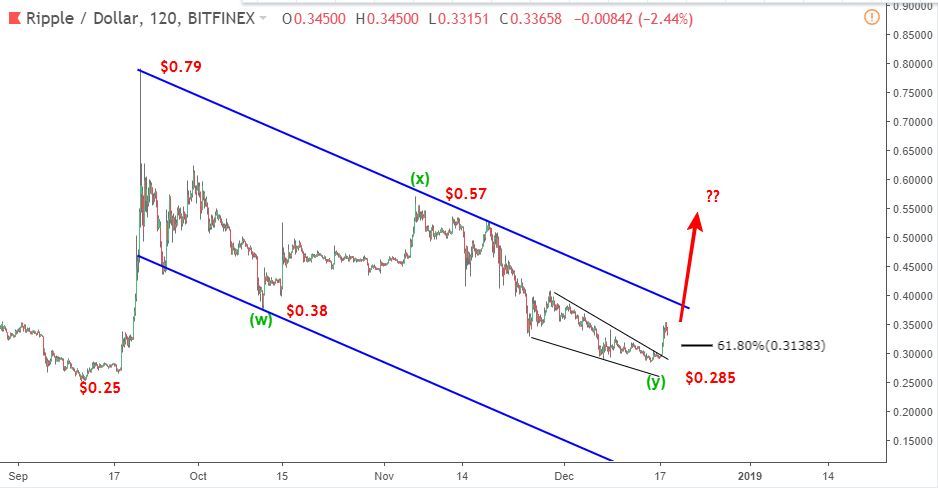 The chart above shows price showing bullish signs after being held above 25-30 cent support zone. A triple zigzag corrective pattern completed here and XRP price might surge. A break above the upper line of the blue channel might see price hit 50 cent on the way to $1. A drop below 25 cent will otherwise see price drop further to 12 cent. If price moves upside as expected, we will most likely see this happen in Bitcoin and others. Is this a sign of Crypto bottoms or another corrective bounce? Time will tell.