Ripple broke upside on Tuesday to hit above 29 cents. Is XRP finally awake? The following Ripple price prediction is based on the Elliott wave theory.

September 19, 2019 | AtoZ Markets – After spending the last four weeks in a 29.5-to-23.5 cents range, XRP finally broke out in the less expected bullish direction. Ripple gained over 12% in less than 16 hours on Tuesday. The move actually started on Saturday when it surged from 25.5 cents to 26.6 cents. A break above the 26.7 cents intraday high was expected. However, XRP dipped on Sunday and Monday to 25.7 cents. Price was therefore bound between the tight 26.7-to-25.1 cents range. Given XRP’s poor performance in 2019, another bearish trend toward 20 cents was a strong option. Meanwhile, XRP broke toward the less expected bullish direction and hit 29.5 cents for the first time since August 13. Will Ripple be able to sustain this move?

Ripple led the Altcoins with significant gains across the board. This has thus reduced Bitcoin dominance from 70% to 68.4 %. We have seen Cryptos behaved in this manner in the first half of this year. Sometimes, Altcoins led the way before Bitcoin joined while the reverse happened in a few other cases. If BTC should join the Alts in the current rally, then the entire market is expected to be boosted. The Alts need the strength and volume of BTC to drive their volatility higher. However, if BTC drops further, the current Altcoin surges might not last. Meanwhile, the market has added about $10 billion in the last 24 hours.

Resistance Levels: XRP price has broken above the 26.7 cents and 28 cents minor resistance levels and now testing the 29.5 cents level. The next bullish targets are at 34 cents and 37 cents.

Support levels: Price has broken away from the deadly 23-24.5 support zone. A break below this zone would have been expected to lead to further crashes to 20 cents or even 12 cents.

In the recent updates, we had two scenarios. Price was sideways and the direction of breakout was not certain. In the last update, we used the chart below. 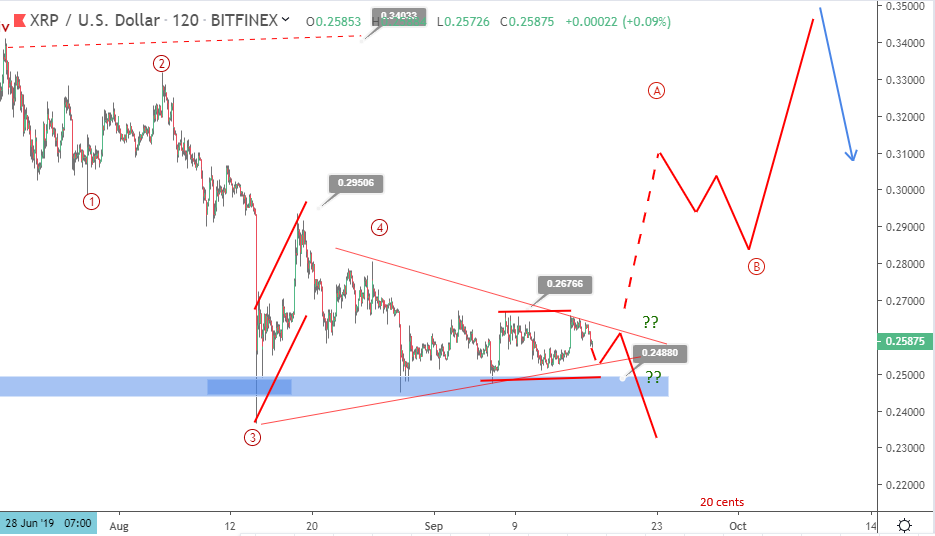 The breakout happened upside as the new chart below shows. It’s now very much likely that XRP will complete at least a 3-wave rally to 34-37 cents especially if BTC joins the bullish trend to drive volumes higher. 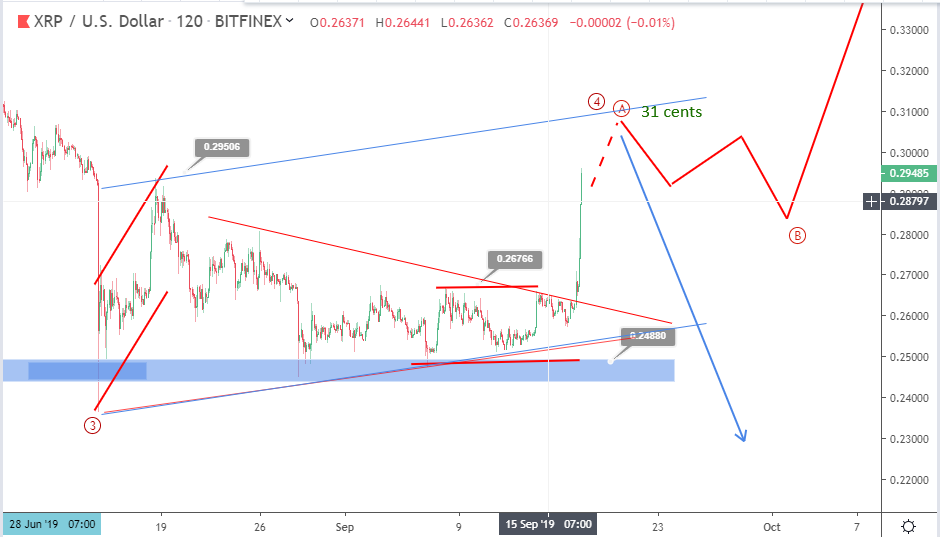 We should expect this rally to continue to 34 cents or higher to 37 cents if Bitcoin breaks upside. Otherwise, XRP current surge may lose momentum around 30-31 cents and then fall sharply below 24 cents to a new low.

Tags Cryptocurrency Elliott wave analysis Ripple price prediction
Forex Crypto
Top 5 Forex Brokers
Top 5 Crypto Exchanges
Your subscription could not be saved. Please try again.
Thank you for subscribing. You will be the first to receive all the latest news, updates, and exclusive advice from the AtoZ Markets experts.
Everyone is reading
Is Forex Trading Halal or Haram in Islam?
Top 5 Forex MT5 Indicators for 2021 you should try
Top 5 cryptocurrencies 2021 | Best Cryptocurrency To Invest
close ×