Ripple has gained about 3% in the last 24 hours. Can this lead to a big push upside? The following give insights based on Elliott wave theory.

January 15, 2019 | AtoZ Markets - The cryptocurrency market has continued last year bearish run though still holding on to December 2018 lows. Between December 2018 and first week of January 2019, prices rallied between 35-100% in what looks like another bounce probably leading to new lows. There is no clarity concerning recovering yet and nothing is more difficult now than predicting the real Crypto bottoms. Have they hit their bottoms just yet or new lows would happen? That's a question that does not have a clear answer. One that is closer to the right answer is how the bullish move should develop on the way to recovery. In Elliott wave terms, a 5-wave strong rally upside is the minimum.

Ripple has taken back its place as the 2nd most capped Crypto according to CoinMarketCap. It's the only Crypto among the majors that has not dropped below it's lowest price during the November bearish onslaught. On 11th September, it spiked high and looked like the start of a major recovery. The spike came with a huge trade volume of $1 billion for many days. The move continued till 21st September as Ripple gained 200% to hit 76 cent from 25 cent. Throughout the same month till December, market never built on that bullish run as Ripple's price dropped steadily to hit 27 cent in a 63% slump. The September 25 cent low was not taken out however. Ripple currently has a market cap of $13 billion and a trade volume of $466 million.

From the look on the chart, it seems price would rally back to the 76 cent top and might even surpass it. The rally might be the 3rd leg of the move that started on 11th September. The chart below shows the Elliott wave analysis of XRPUSD. 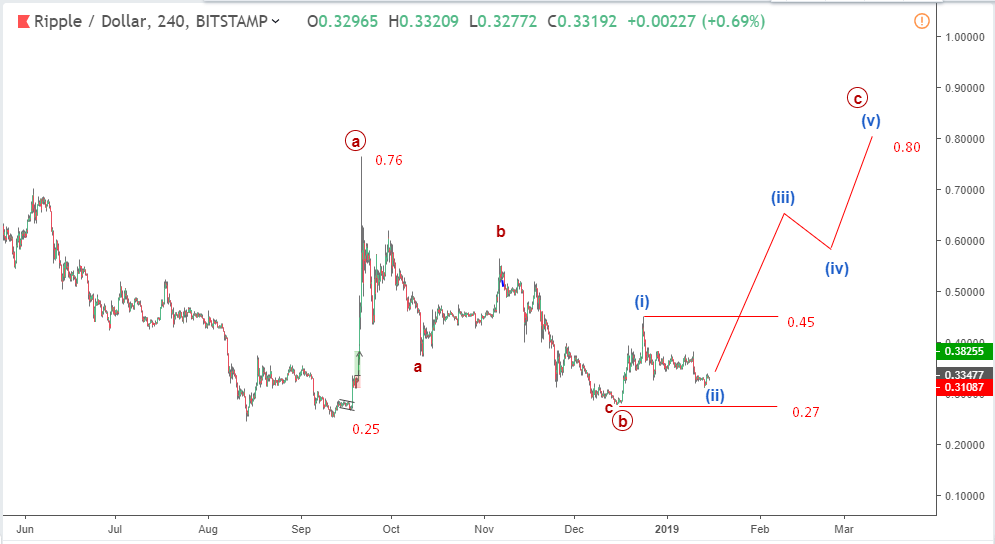 The drop from 76 cent to 27 cent looks corrective and might just lead to the continuation of a bullish zigzag pattern which started at 25 cent. Price should break above 45 cent to confirm the expected rally which should continue with a 5-wave rally to 80 cent The move, if it happens, will again raise the hope of a recovery. Conversely, a dip below 27 cent will most likely see Ripple making a new low after almost 4 months of staying above it.

XRPUSD Analysis: Will Ripple Price Rise in 2022?
Broker of the month!