Ripple in currently forming a bullish flag pattern that might be followed by a bullish spike. Will there be a breakout upside to $0.6?

October 2018 | AtoZMarkets – According to CoinMarketCap, Ripple has gained slightly more than 2% in the last 24 hours. Its trading volume has been reduced by nearly 67% since 15th October’s $1 Billion surge. Meanwhile its volume of $367 million in the last 24 hours is the highest this week. Market Cap at $18 billion is within last two weeks’ average.

XRPUSD remains in a sideway range after the bullish breakout that happened mid-October. Since that spike to $0.53, Ripple has remained silent and moved within a range. On Monday, price dropped from 46 cent to 43 cent and remained silent the following day. Yesterday, price moved back to 46 cent from 43 cent. Today, however, it has remained silent trading around 45 cent. This price activities from mid-October 53 cent spike has completed a familiar chart pattern – Flag pattern. Flag pattern is a continuation pattern. This means that XRP could break upside to 60 cent according to the XRPUSD Elliott Wave Forecast. 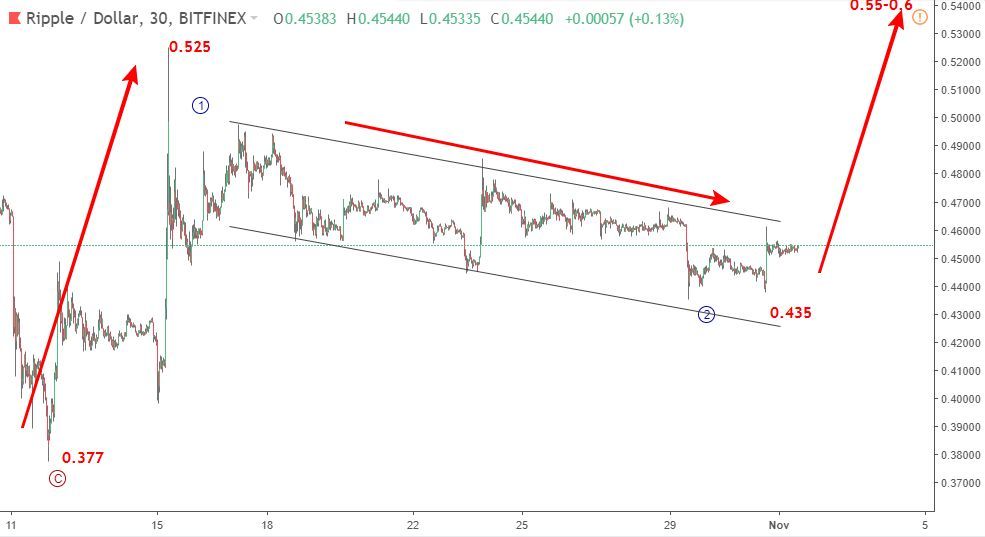 After 0.377-0.525 big spike, price has remained confined in a falling channel. This chart pattern is referred to as Flag pattern. Flag patterns often signify immediate trend continuation and requires a breakout in the direction of the preceding trend for confirmation. A break above the channel at around 0.47 might see Ripple rally to 0.55 – 0.6. On the other hand, a break below 0.435 might see it dig further to test 0.377.