Ripple price is confined in a triangle range, suggesting a big move is on the way. A breakout is highly anticipated but the market currently lacks the needed momentum.

March 19, 2019 | AtoZ Markets – For the third day in a row this week, Ripple price has stayed unchanged – gyrating between 31 and 32 cents with no momentum to break away in either direction. It’s often so that the longer a price chart remains sideways, the bigger the eventual breakout. Since the January-February rally to 34 cents, the XRP price has dropped gradually below 33 and 32 cents in the last three weeks. Today so far, the price has not made any meaningful move. Ripple price behaviour since February has completed a contrasting triangle but the price is delaying a breakout while the pattern gets narrower.

WooCommerce integration and other adoptions

In recent weeks, Ripple has been in the news for good reasons. It was announced last Friday, that XRP has been successfully integrated with e-commerce platform WooCommerce. This means that more than 3 million users will have the chance to adopt Ripple as a payment method on their websites. This is a step forward to achieving mass adoption that the entire crypto market so much craves for. This news came barely three weeks after Coinbase announced the inclusion of Ripple on its advanced platform – Coinbase pro. Also recently, eToro announced its plans to adopt XRapid, a big Ripple payment platform.

Such adoptions and integrations by potentially millions of people will most likely attract more investors and users to a cryptocurrency. However, Ripple price has not seen much changes yet. Since dropping behind Ethereum as the 3rd largest crypto, it has not made its way back. Its trading volume has remained unchanged which suggests that the effects of the adoptions have not yet been seen. In fact, a similar coin, Stellar Lumens has performed better since the turn of the year. Could Ripple be saving its strength for a wild big move? 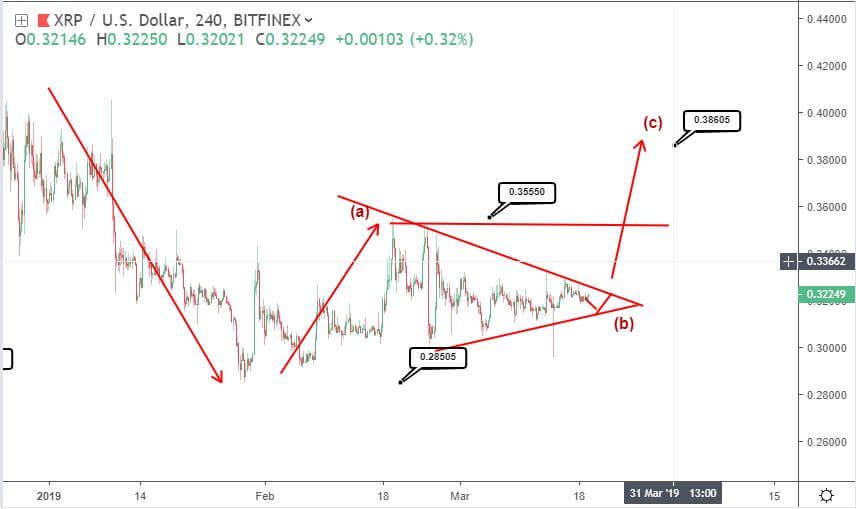 In the short term, Ripple price will most likely continue the February upsurge. After the rally to 35.5 cents, the price has dropped and has maintained a contrasting triangle pattern with a very narrow mouth. If the news of Ripple adoptions would take effect, there might be a surge in trade volume and capitalization for the cryptocurrency. An upsurge could happen to 38-40 cents in the short-term. This may not lead to a complete recovery. Major recovery would be highly dependent on the entire market performance. On the other hand, if a break below 30 cents happens instead, Ripple would hit a new low below 25 cents.

Tags PIVX Ripple Elliott wave analysis Ripple price prediction XRP/USD
Forex Crypto
Top 5 Forex Brokers
Top 5 Crypto Exchanges
Your subscription could not be saved. Please try again.
Thank you for subscribing. You will be the first to receive all the latest news, updates, and exclusive advice from the AtoZ Markets experts.
Everyone is reading
Top 5 Forex MT5 Indicators for 2021 you should try
Top 5 Cryptos to Watch in Quarter 2 2021
Bitcoin Facing Resistance Around $60,000 Event Area - What Next?
close ×