Ripple price surged during the weekend and hit 44 cents on Sunday. Will XRP break above the 48 cents high?

June 17, 2019 | AtoZ Markets – The cryptocurrency market surged during the weekend. Bitcoin was the highest gainer but cryptocurrencies like Ripple also recorded significant gains. Ripple price broke above 43 cents intraday resistance level but is still some way from the 47-48 cents 2019 high. The short term trend remains bullish after price surged from 28.5 cents to 48 cents in May. It, however, remains to be seen whether XRP bulls are ready to take off from here or make another little bearish leg. Despite the current rally, price is still within the 34 cents – 48 cents corrective zone after entering into it about one month ago.

According to data available on Coinmarketcap, Ripple remains the third largest cryptocurrency based on market capitalization. The digital asset boasts of over $18 billion in market cap. The crypto market is back to its 2019 high as many majors are now nearing their respective May 2019 highs. In fact, Bitcoin and Litecoin have made new highs in June. Ripple has gained about 3.8% in the last 24 hours – more than any other cryptocurrency in the top 5.

Ripple price is still within the short term 34-44 cents zone. The main levels upside is the 48 cents high. A break above 48 cents will make a new 2019 high and set a meeting with 57 cents and 80 cents resistance levels. To the downside, further dips will be expected to be limited above 33 cents short term level. A dip below the 28.5 cents could cause major panic in the XRP community leading to a devastating sell-off.

Since the bullish breakthrough in December, Ripple has lagged behind other major digital assets. While many in the top 10 have recorded between 200-550% gains since December, Ripple is not even at 100% gain yet. In the last update, we expected the first wave of the recovery from 28.5 cents low to have completed at 48 cents and the 2nd wave to complete at 34-35 cents as the chart below shows. 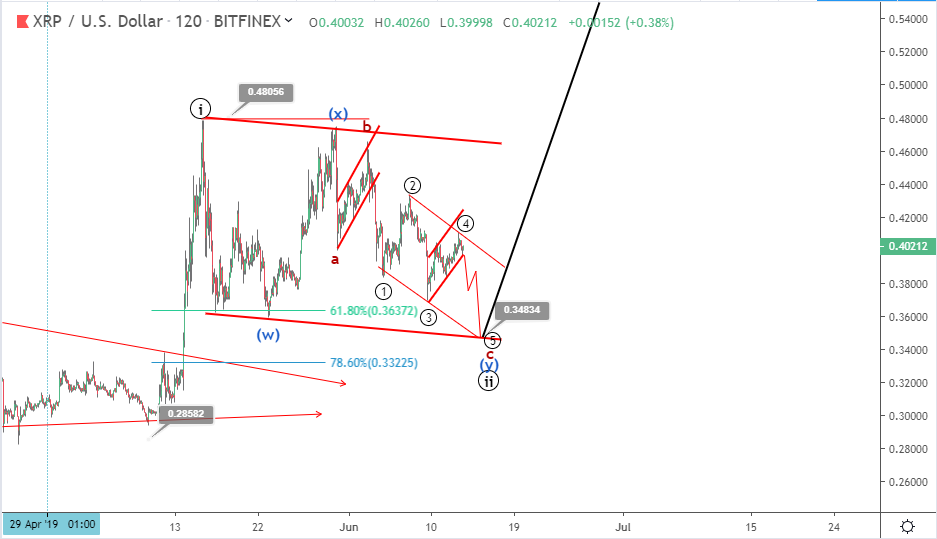 A double zigzag ending with a diagonal would have been a perfect bullish signal. However, the setup was not completed and the price sought another path. From another perspective, the price could have completed the 2nd wave already with a flat pattern as the chart below shows 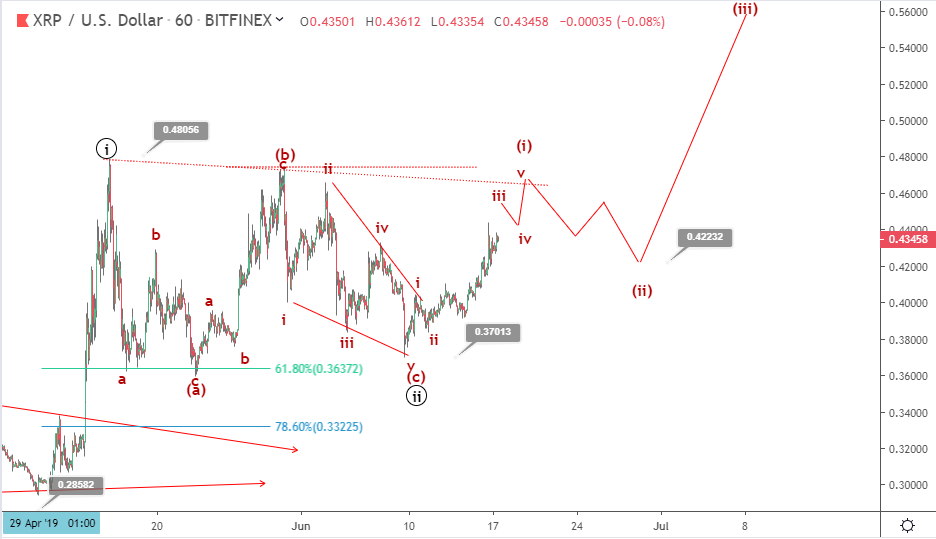 The flat pattern completed at 37 cents and Ripple pushed to 44 cents. The 3rd wave is probably ongoing. The rally could be temporarily resisted at 46-48 cents zone where wave (i) of the 3rd wave could end. A break above the 46-48 zone is needed for the recovery to continue to 80 cents or even $1.

Tags Cryptocurrency Elliott wave analysis Ripple price prediction XRPUSD Price
Forex Crypto
Top 5 Forex Brokers
Top 5 Crypto Exchanges
Your subscription could not be saved. Please try again.
Thank you for subscribing. You will be the first to receive all the latest news, updates, and exclusive advice from the AtoZ Markets experts.
Everyone is reading
Is Forex Trading Halal or Haram in Islam?
Top 5 cryptocurrencies 2021 | Best Cryptocurrency To Invest
How to Setup Monero Mining in 2021?
close ×