Ripple has turned somehow bullish in a large bearish Crypto market with price surge in September. XRP is currently consolidating between 44 cent and 50 cent. A new wave of bullish spike might happen soon.

October 2018 | AtoZMarkets – Ripple, just like other major Cryptos, has remained sideways this week. In September, Ripple surprised many with a big 200% surge to $0.80. Though there was a fast dip afterwards, below $0.5 as the Crypto bearish pressure waved in. Early this month, the world trade organization spoke about the potential of the Ripple platform and how it could change the ways global financial system works. WTO predicted that once XRP leaves the current test mode, it’s going to compete seriously in the world financial circle. After the September huge surge, XRP made two quick moves in late September – rallied quickly to $0.62 after a fast dip to $0.43. The first week and larger part of the second week of October was bad for the Crypto market. In this period, Ripple slumped to 37 cents, its lowest since the September hike.

According to CoinMarketCap, in terms of trade volume, XRP has dropped by almost 70% of the over $1 billion achieved during the September hike. Currently, XRP trade volume at $273 million is a bit unchanged from what it was at the beginning of the week. Market capitalization at $18 billion is about the average of the last two weeks. 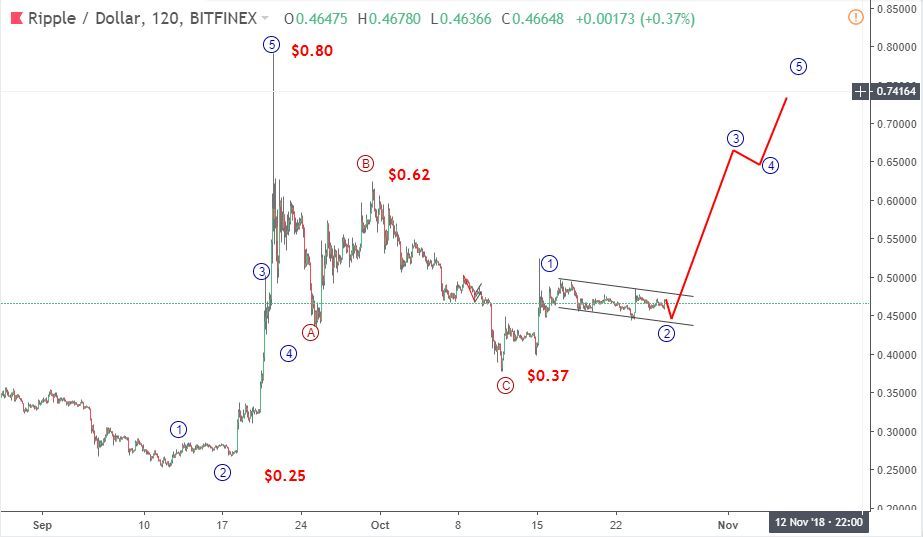 The spike from 0.25 to 0.80 completed an impulse wave which might be the base of a truly bullish recovery. The dip from 0.8 to 0.37 completed a corrective zigzag pattern. From 0.37, the new bullish trend is expected to continue. The spike from 0.37 to 0.53 in mid-October was a good response. From 0.37, a new wave count begins – either a corrective leg to 0.62 or a full blown impulse wave rally far above 0.8. Price is expected to break above the wave 1- 2 (circled in blue) sideways move. If it breaks upside, we will most likely see 0.6 at least. On the downside, if it breaks below instead, a new bearish wave might threaten 0.25 low after seeing off 0.37.