Ripple has recorded a net gain in the last five days. Will the surge continue or price will return downside? The following technical analysis is based on the Elliott wave theory.

August 20, 2019 | AtoZ Markets - Ripple price is currently trading at 27.38 cents at the time of writing this report. In July, the cryptocurrency dropped continuously. The drop continued throughout the first two weeks of August until it hit 23.6 cents to mark its lowest since late 2017. This means that all the huge price gains between December 2017 and January 2018 are gone. Meanwhile, XRP has seen a minor resurgence this week after making a slight recovery to 29.6 cents. However, the 28-30 cents resistance zone has resisted further advance and the price is now back below the zone.

Despite the rough times, Ripple still remains the third-largest cryptocurrency, based on market capitalization on Coinmarketcap. This year has been bullish for the crypto market, especially the first half, despite the current bearish run. Most of the top cryptos still have significant net gains. Ripple, on the other hand, has been very much disappointing as it continued the 2018 bearish trend. Is all hope lost? Perhaps not. Let's look at the short term analysis.

Price is currently trading between 37 cents and 24 cents which are the nearest critical resistance and support levels respectively. Price is, however, closer to 24 cents. A dip below 24 cents will most probably extend XRP losses to 20 cents. To the upside, if price rallies above 37 cents, the bulls can have another chance of building on a major recovery.

In the last update, we expected XRP bearish run to continue to 25 cents after price broke below 37 cents and exhibited the early signs of an impulse wave. The chart below was used in the last update. 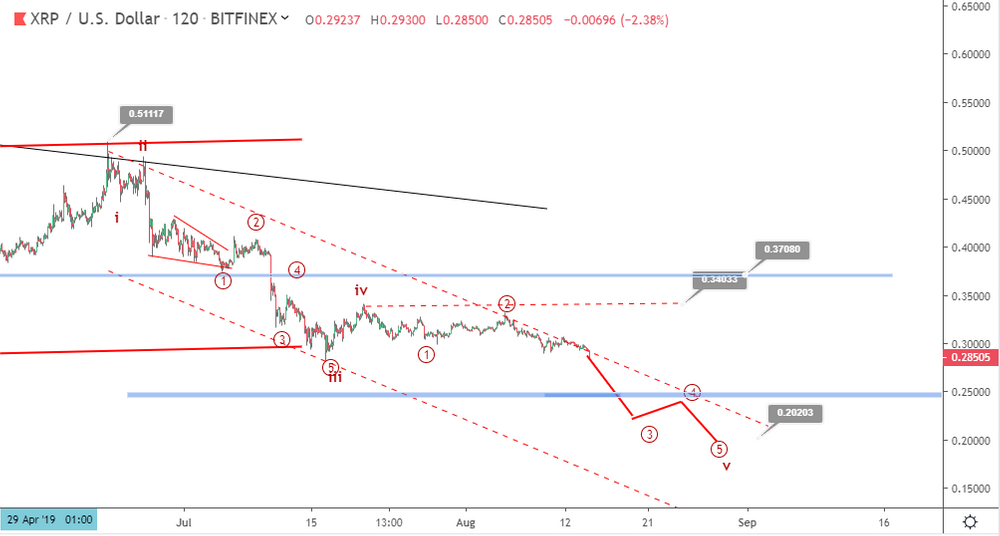 Price bounced off the 25 cents support level and makes a minor rally which can now be taken as the 4th sub-wave of wave v. The new chart below explains better. 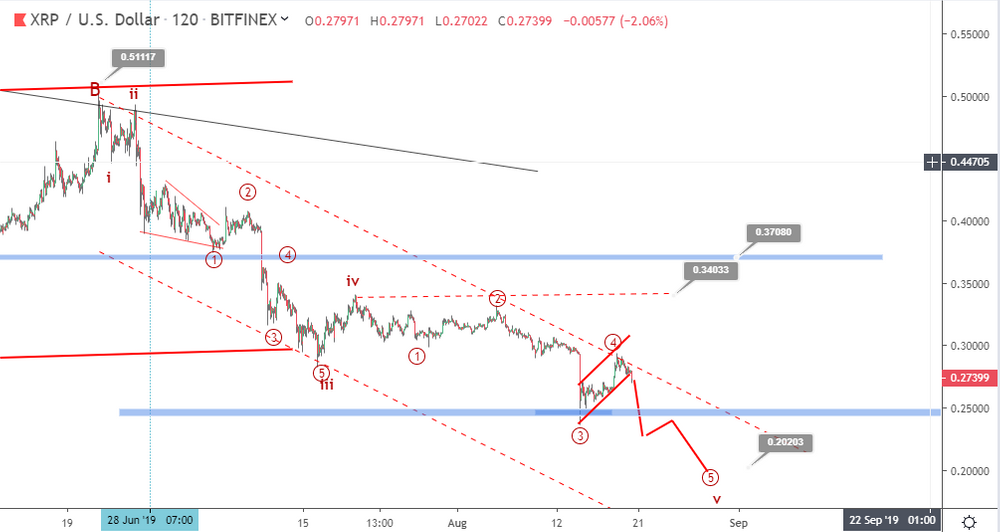 The 4th sub-wave could push further to 20 cents or lower before price pushes up again. If a big surge happens above the 34-37 cents zone, further rallies to 50 cents should follow.