Ripple Price Nearing $4 Mark, having reached the remarkable highs during the past two weeks. Now, the cryptocurrency has taken over the place of the second biggest cryptocurrency by market cap after Bitcoin. What awaits this coin in the current year?

4 January, AtoZForex – Ripple has started the year on a high note – the cryptocurrency has surged to the record level this morning. Two weeks ago, the price of XRP has surpassed the historic $1 level, while today the value of one XRP coin stands at $3.77.

The San-Francisco-based cryptocurrency has hit the new record high. While the price might not appear as a significant value to you, do not let the number mislead you. In fact, Ripple is one of the most valuable and credible runner-ups in regards to Bitcoin. Having more than tripled in price, XRP has plenty of tokens circulating on the market. 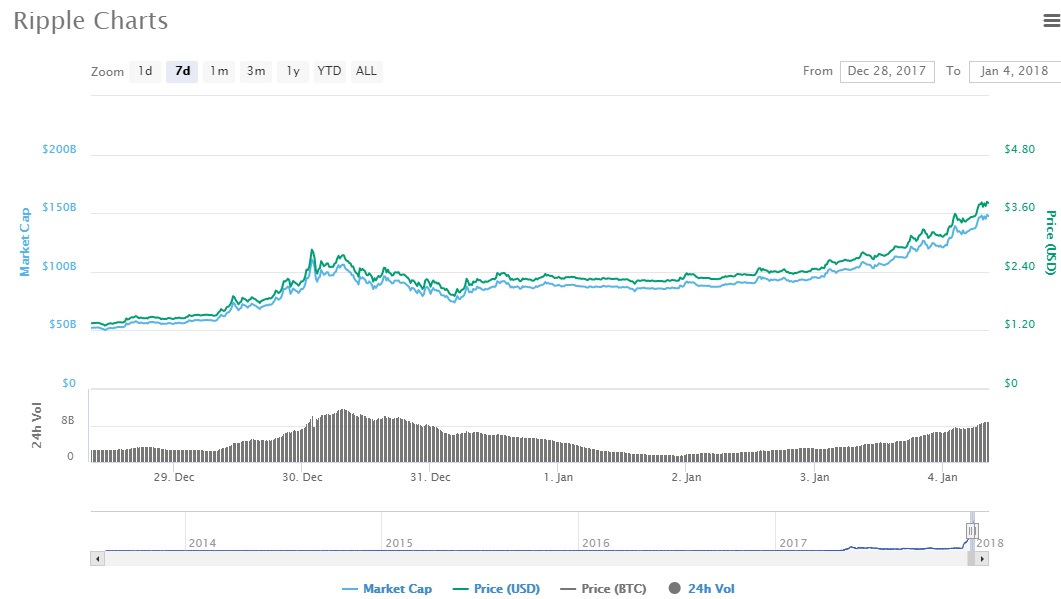 The recent surge in Ripple’s price marks the XRP’s place as the highest valued cryptocurrency behind BTC in terms of market capitalization. The market cap figure of Ripple is now at $146,195,334,389.

According to the data from Coinmarketcap, the value of Ripple has risen almost 40% in the last 24 hours. This accounts for a remarkable rebound, considering the coin has dropped to $2 just some days before the New Year.

What is next for Ripple?

While investors all over the globe are anxiously awaiting next Ripple moves, some began to speculate on the future price of this unique cryptocurrency. Some of the forecasts project $50 and even $100 by the end of 2018. However, considering the volatile nature of cryptomarket, the situation may unfold in the most unpredictable way.

In fact, many industry insiders believe that just to reach a $10 mark, Ripple would need another $300 billion investment. This fact is perceived as one of the obstacles for XRP hitting the high levels.

Nevertheless, it is possible that Ripple price reached $20 mark in case the cryptocurrency goes mainstream.

Many believe Ripple has some advantages over Bitcoin. For instance, Ripple’s technology makes it a secure currency, according to the supporters. Also, the team behind the project claims that the coin provides faster transactions than Bitcoin – just a matter of seconds.