Despite a buoyant Bitcoin this week, Ripple has sparingly returned downside. The following Ripple price analysis is based on the Elliott wave theory.

January 08, 2020 | AtoZ Markets - Ripple price recovery has surrendered to the 22.5 cents resistance level. The November bearish drive dragged Ripple price to is lowest in two years. However, the December-January recovery to 22.5 cents has proved to be weak. The market will most likely continue downside to make new lows around 12-13 cents. Ripple is by far the worst performer among the top 5 since the 2018 bearish trend. The third-largest crypto just couldn't recover. With a lot of pessimism concerning 'dumping' and recent delisting from Bitbox, it seems Ripple will have more digging to do.

The crypto market has gained over $25 billion since December market cap low. A lot of thanks to a rising Bitcoin price which has pulled the market along. Bitcoin now holds a 69% share of the market. Experts have also predicted that this trend will continue in 2020 as Bitcoin is closer to mass adoption than the Altcoins. Bitcoin 'reward halving' coming later in the year might also push the market toward some recovery. Meanwhile, Ripple will most likely lag behind in 2020 even if the crypto market recovers. It could test 31.5 cents and perhaps 51 cents if Bitcoin breaks above the $13,900 2019 high. However, if Bitcoin disappoints, Ripple will drop to far lower prices.

Since the 2018 bearish trend, Ripple hit its highest price 51 cents in June 2019. However, the market has surrendered 60% of this gain. From 51 cents, we counted a zigzag pattern which is an extension of a larger bearish corrective structure. In addition, after the Ripple price broke below the triangle pattern (after peaking at 31.5 cents), it has continued with a bearish impulse wave leg. In the last update, we started counting a bearish impulse wave from 31.5 cents with the chart below (Charting tools from TradingView). 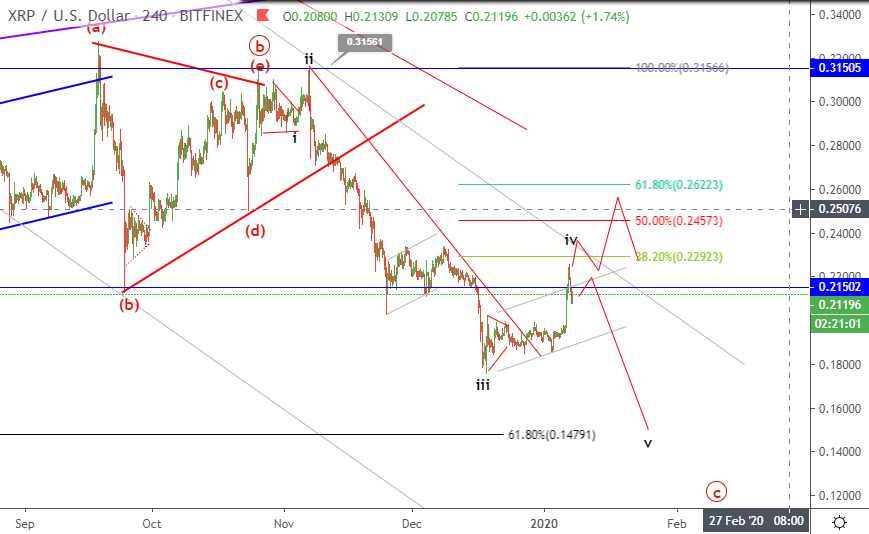 Wave iv ended around 22.5 cents and we expected the market to continue toward 13 cents for wave v. On the other hand, higher rallies above the 61.8% Fib-retracement level would have violated this expectation. As the new chart below shows, the former is currently valid. 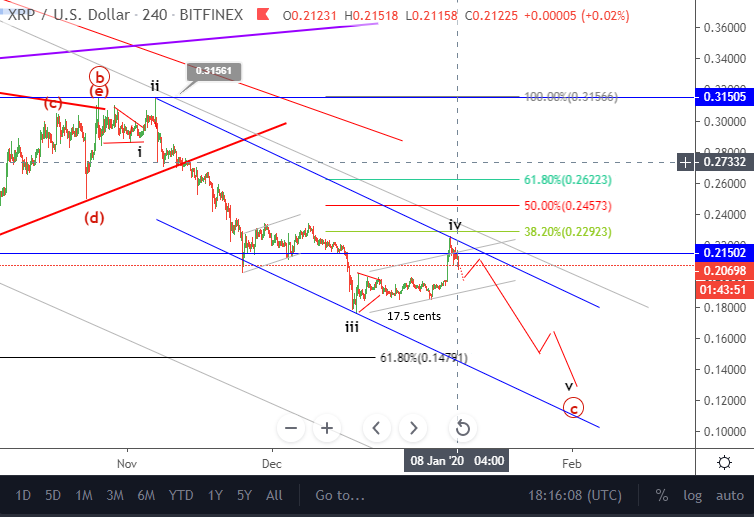 Wave v should extend below the 17.5 cents toward the base of its channel at 12-13 cents. Unless a massive surge above the channels happens, the Ripple price is still overwhelmingly bearish.