Ripple has gained about 5% after yesterday's bearish move that saw it dropped below 40 cent. Today's bullish rebound has seen XRP get back above $0.4. Will price hit $0.5 handle soon?

October, 2018 | AtoZMarkets.com- XRPUSD is the biggest gainer after yesterday's Crypto crash. Wednesday was a red day for the Cryptos as nearly all coins and tokens plunged new their year lows. Some even surpassed to make new lows. Ripple dropped below the $0.43 support to $0.37. $0.37 is a resistance level broken upside on 17th August which later turned a support level. Ripple quickly increased by 18% after being well-supported at $0.37. In as much as price stays clear above this level, there is still tendency of a bullish recovery back to the $0.5 handle or even higher. A drop below this level might lead to further drop below $0.25.

In the last update, we noted important price levels in XRPUSD and the most likely possibilities. The chart below was used. 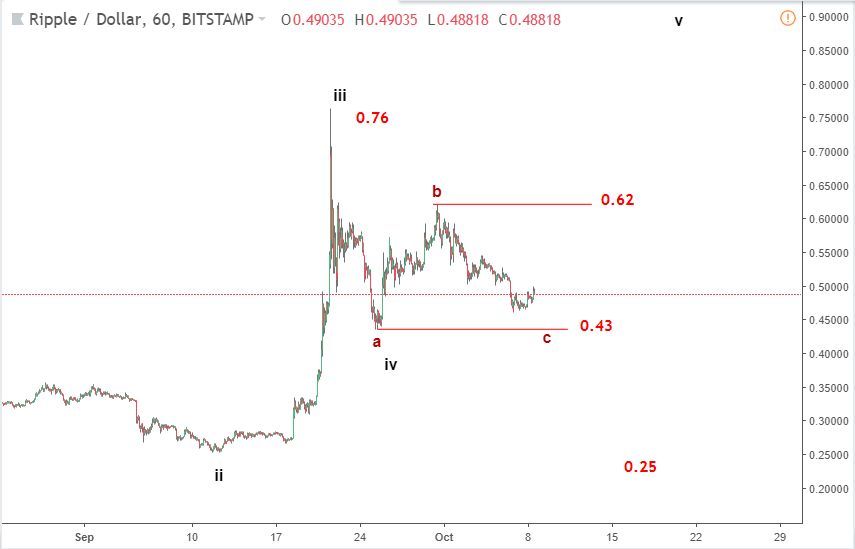 The bullish strong rally in September looks like an impulse wave. The current correction from 0.76 is expected to be the 4th wave if this wave analysis is correct. If price drops below 0.43, it's expected to be minimal and stay above 0.37. A break below 0.37 will likely see price heading to 0.25. If the current leg is held above 0.37, price could rally again to break above 0.62 and 0.76 en-route to $1. On another level, price could be contained between 0.62 and 0.43 for a much longer time to complete a triangle pattern before an eventual breakout.

The chart below shows the new update. Ripple advanced from 0.37 to the 0.43 support turned resistance. If there is enough bullish momentum, we should see price advance above 0.43. After 0.43, the next resistance levels are 0.62 and 0.76. Downside, the next support level after 0.37 is 0.25. if price drops further below 0.37, there is a likelihood that XRP would drop to make new lows below 0.25. From 0.76 to the current price level, there is an emerging Zigzag pattern within a falling channel. If the current rally breaks above the channel (and definitely above 0.43), Ripple could turn bullish again.

Where do you think the breakout would happen? Let’s know by your comment below. Don’t forget to share this analysis with people that matter to you.

Bitcoin Surges 12% amid Another Tweet by Elon Musk
Forex Crypto
Top 5 Forex Brokers
Top 5 Crypto Exchanges
Your subscription could not be saved. Please try again.
Thank you for subscribing. You will be the first to receive all the latest news, updates, and exclusive advice from the AtoZ Markets experts.
Everyone is reading
SEC Lawsuit Against Ripple May Drag On Until 2022
Ethereum Facing Support Around $2,300 Price Area - Will Strike Upward?
Will the Prices of Gold and Silver Rise After FED Meeting?
close ×