Ripple has gained nearly 20% this week after another big bullish breakout on Monday and Tuesday. It continues the mid-October bullish move to hit a 4 weeks high. Will XRP advance further?

October 2018 | AtoZMarkets – Ripple is so far the highest gainer this week among the top 50 cryptocurrencies listed on CoinMarketCap. Price of Ripple broke out of a 2-weeks range to trade above 50 cents. Prior to the range, between 12th and 17th October, XRP gained about 27% after it hit 47.5 cents from 37 cents. This means that the third largest Cryptocurrency has gained about 50% since 12th October. Meanwhile, this move was expected from technical analysis perspective as discussed in the last update when XRP completed a bullish flag pattern.

Today, however, price is making slight downside retracement around 52 cents at the time of writing. XRP trade volume and market capitalization has also increased significantly. Market cap has increased by $2 billion from last week's average. Trade volume today at $1.3 billion almost quadruples last week's average. If this trend continues, we will most likely see it hit at least 60 cents this week. 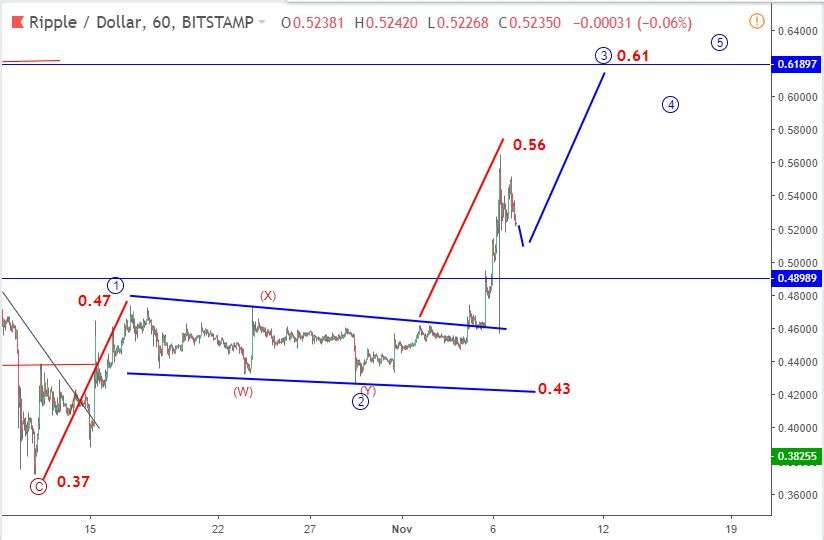 The Flag pattern is shown above with a 0.37-0.47 handle and 0.47-0.43 body. Target was projected to 0.55 which price has already hit. If the current dip doesn't go straight into the flag body, we might see more rallies to the next resistance level at 0.61. Above 0.61, we would confirm the rally from 0.37 to be an impulse wave which would be expected to hit $1 before the next drop. On the downside, if price drops back into the range body, it might break below 0.43 to continue bearish. Price might also start another range move between 0.5 and 0.55 for another 1-2 weeks before the next action.