Ripple burst upside to hit over 38 cents early on Tuesday. Will it break above 40 cents 2019 high?

May 14, 2019 | AtoZ Markets – Despite Bitcoin and the entire cryptocurrency market are finding their ways upside, Ripple has slowed down and threatened to break below the 28.5 cents low twice this year. Meanwhile, to the relief of the Ripple community, the cryptocurrency surged from 32 cents to over 38 cents early on Tuesday but still within a range that has now lasted for nearly five months. Ripple has now gained over 32% since the December low. In contrast, Bitcoin, Litecoin and Ethereum have gained 150%, 340% and 150% respectively in the same period.

The first hurdle to overcome has to be a big break out of the 5 months triangle price range. A break above 38 cents and then followed by further rallies above 46 cents will set this cryptocurrency on the way up to 80 cents and then a complete recovery can follow. Until that, XRP still remains under the bearish pressure. A fall back into the triangle zone below 33 cents might lead to another threatening dip toward 28.5 cents low.

Ripple is the highest gainer in the last 24 hours with over 14% gain and still retains its 3rd spot on Coinmarketcap with over $15 billion in market capitalization. XRPUSD still has a long way to get back to the $130 billion recorded in February 2018.

In the last update done a week ago, we expected rallies to 35-36 cents after a short dip to 30 cents, to complete the sideways triangle pattern that started in December 2019. The chart below was used. 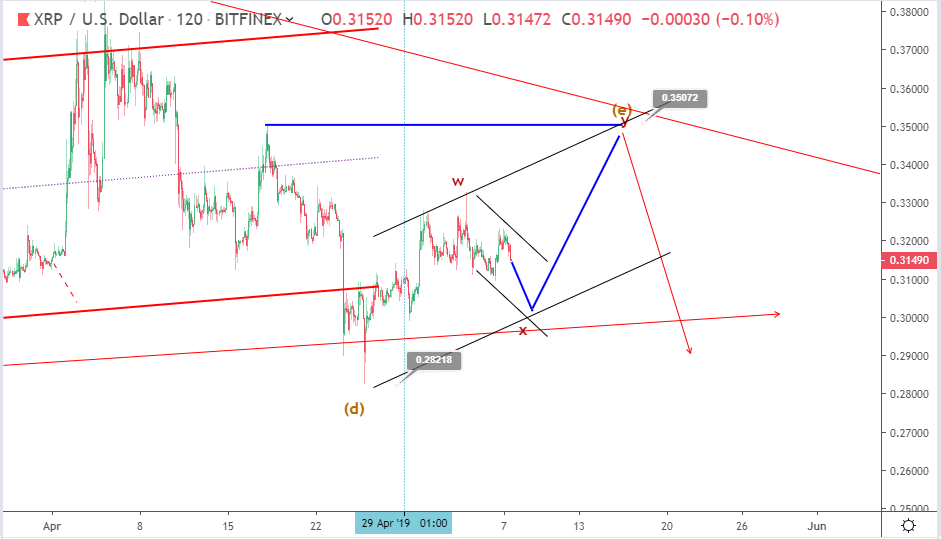 On the other hand, we expected that ”if price surges further to reclaim 38 cents or above”, the bearish triangle pattern would be invalidated and ”the bias will turn bullish”. All these expectations still hold. While a break to 39 cents has happened, the price needs to sustain the move. 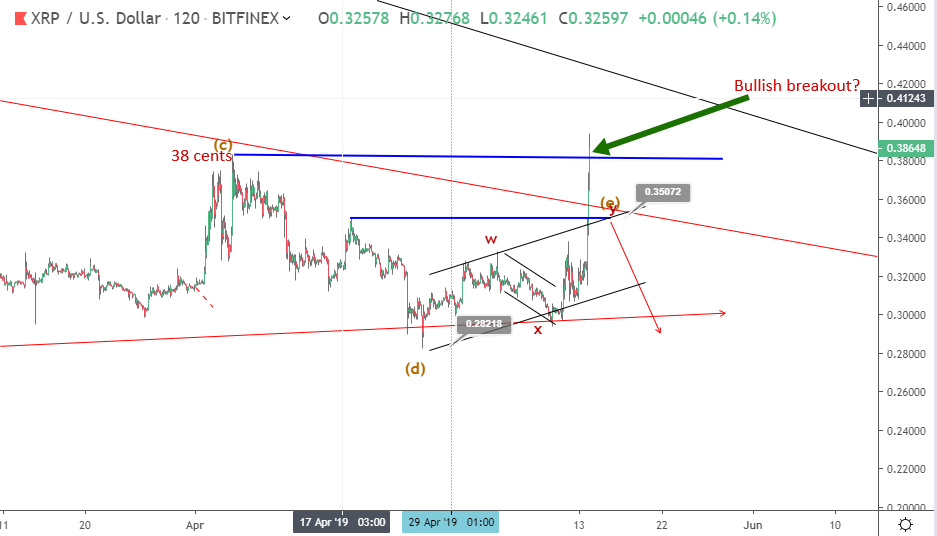 The chart above shows the triangle breaking to the upside instead. Price has already hit 40 cents on some exchanges which is the highest price since early January. Meanwhile, a break above the larger channel (45 cents) is expected to trigger further rallies toward 80 cents high.