Ripple recovers to 34 cents on Thursday after coming close to retesting 30 cents in the previous days.

April 18, 2019. AtoZ Markets – XRP remains the third largest crypto in terms of market capitalization. It’s also the most searched for after Bitcoin. However, the banker’s cryptocurrency as it sometimes called, has not had a very good year compared to its rivals. The crypto has found it very hard to have a sustained breakout. Bitcoin, Litecoin, Ethereum and even Stellar and Cardano have performed better in terms of price growth.

What happened to Ripple?

In April, the crypto market started with big surges across the board. While Bitcoin, Ethereum and other high-capped cryptos had profits in excess of 10% and 20%, Ripple has found it difficult to maintain a 5% net gain in April after having nearly 20% gain in the first three days. The sudden drop to 31 cents didn’t look good and therefore suggested XRP could drop further after completing a corrective pattern at 38 cents two weeks ago.

Ripple trade volume has climbed above $1 billion this week after a near 12% upsurge that saw the crypto hit 35 cents early on Thursday. XRP market capitalization has increased to over $14 billion after a 3.64% gain in the last 24 hours according to data available on Coinmarketcap. It remains to be seen whether the decent recovery of the last few days would resurrect Ripple and lead it to a good bullish breakout. Price is still under serious bearish pressure and only a big surge like the one seen between April 1-4 could take it away from the sell-off zone.

From the perspective of technical analysis, Ripple still looks bearish. in the last update, when the price dropped to 31 cents, we used the chart below to illustrate likely near-term direction. 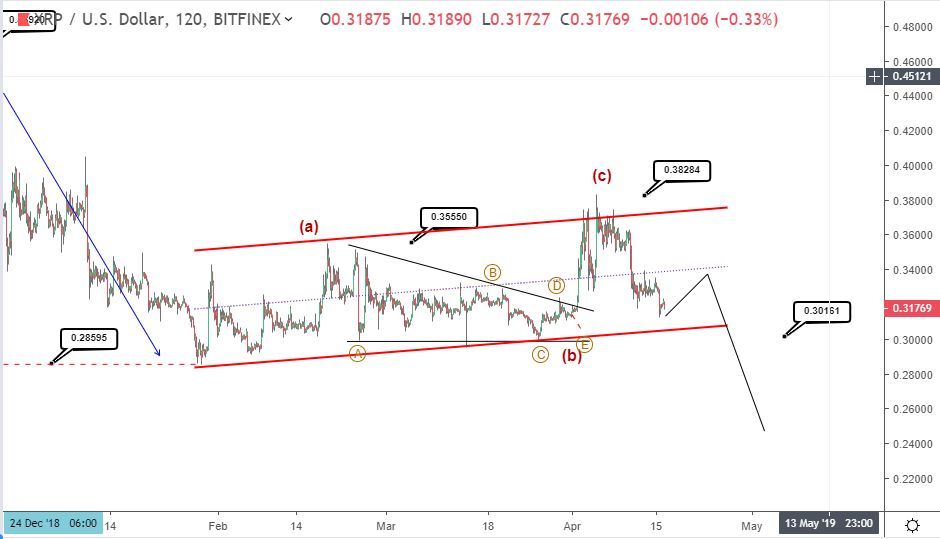 Price was close to the 30 cents psychological level. A bounce was expected to the channel mid-line at 34 cents before further sell-offs. The rally happened slightly above the mid-line as the chart below shows. 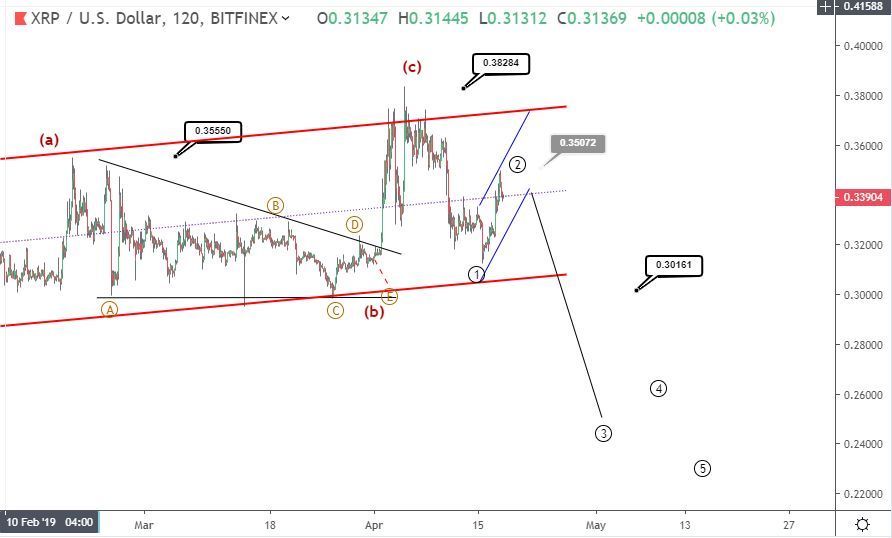 A bearish impulse wave to 25 cents or below could follow the end of the zigzag bullish corrective pattern at 38 cents. A dip below 31 cents will confirm this wave forecast. However, if the current recovery intensifies and hits significantly above 38 cents, the bulls are back in control.