On May 3, nChain chief scientist and self-proclaimed Satoshi Nakamoto- Craig Wright was served a legal notice issued by the United States District Court of the Southern District of Florida. The order demanded to reveal Wright’s Bitcoin addresses as of Dec. 31, 2013, as evidence of Bitcoin ownership. The court document said:

“In essence, he does not argue undue burden, he argues impossibility. The argument that Dr. Wright is incapable of providing an accurate listing of his current or historical bitcoin holdings was never presented in any of the prior hearings before this Court when the Court was crafting the scope of discovery.”

The procedure comes as part of an ongoing case against Wright filed by the computer scientist David Kleiman.

Over the years, more than once has been raised the question about the real identity behind the Bitcoin creator. Many assumptions were made about the identity of the creator of the most famous crypto; some claimed it was a Japanese professor, while others suggested that it was Ripple’s CTO, David Schwartz. Other candidates on the speculative list were Charlie Lee from Litecoin and the late bitcoin developer David Kleiman.

Craig Wright remains a highly controversial figure in the Satoshi debate. It seems that he is ready to sue anyone who dares to doubt his right to call himself the real founder of Bitcoin. Last time, Bitcoin SV supporter Craig Wright filed a lawsuit against Roger Ver aka “Bitcoin Jesus”, for calling him a fraud and a liar in a YouTube video.

Over the past few months, a large number of prominent crypto personalities, including Binance director Changpeng Zhao, have joined Satoshi debate with Craig Wright. Some of the crypto community members have taken certain measures towards Wright controversial behavior, which caused another wave of comments on social media.

This time Calvin Ayre a Canadian-Antiguan entrepreneur Jet Ski enthusiast and one of Wright’s biggest supporters decided to say his word.

Despite that most of the crypto community has always been against Craig Wright and his claim “I am Satoshi”, Calvin Ayre was the only strong supporter of the nChain scientist.

Ayre has repeatedly proved his loyalty to Wright and Bitcoin SV camp via Twitter. The founder of the online gambling company Bodog in his latest tweets expressed his support of Wright and calling Bitcoin SV “the only real Bitcoin.” 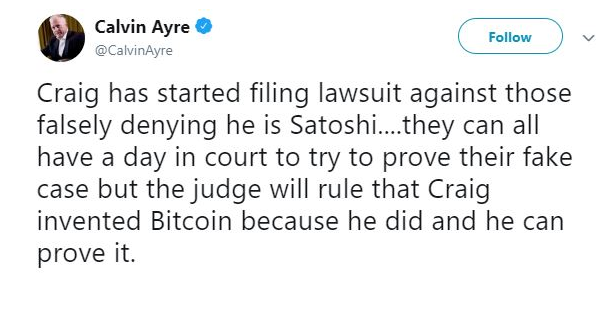 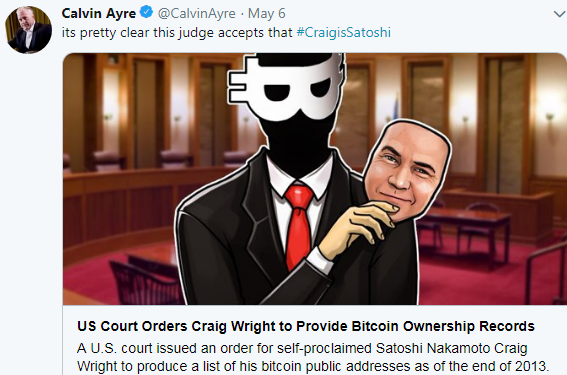 Ayre’s activity in Tweeter has attracted Ripple’s CTO David Schwartz’s attention. Schwartz, one of the most influential computer programmers in the crypto verse and chief technology officer replied to this tweet, criticizing how Ayre was allegedly twisting words in his favor. He wrote:

“Are you for real? People who believe you don’t usually demand you submit evidence to back up your claims over your strenuous objections. This judge is clearly almost out of patience with someone who has used up any goodwill he might have had.”