May 24, 2021, | AtoZ Markets -In a recent reply to Meltem Demirors, Chief Strategy Officer at CoinShares, Garlinghouse said: “It’s beyond flattering that you think Ripple is the puppet master behind Elon Musk, countless scientists, governments, crypto enthusiasts and others who have stated the facts about BTC’s energy use.”

Ripple's CEO highlighted some issues regarding the energy usage of cryptocurrency assets earlier this month and urged the crypto community to find solutions related to the energy problems.

In the past days, the millionaire Elon Musk criticized Bitcoin for its energy consumption despite the fact that Tesla holds the world’s largest cryptocurrency. 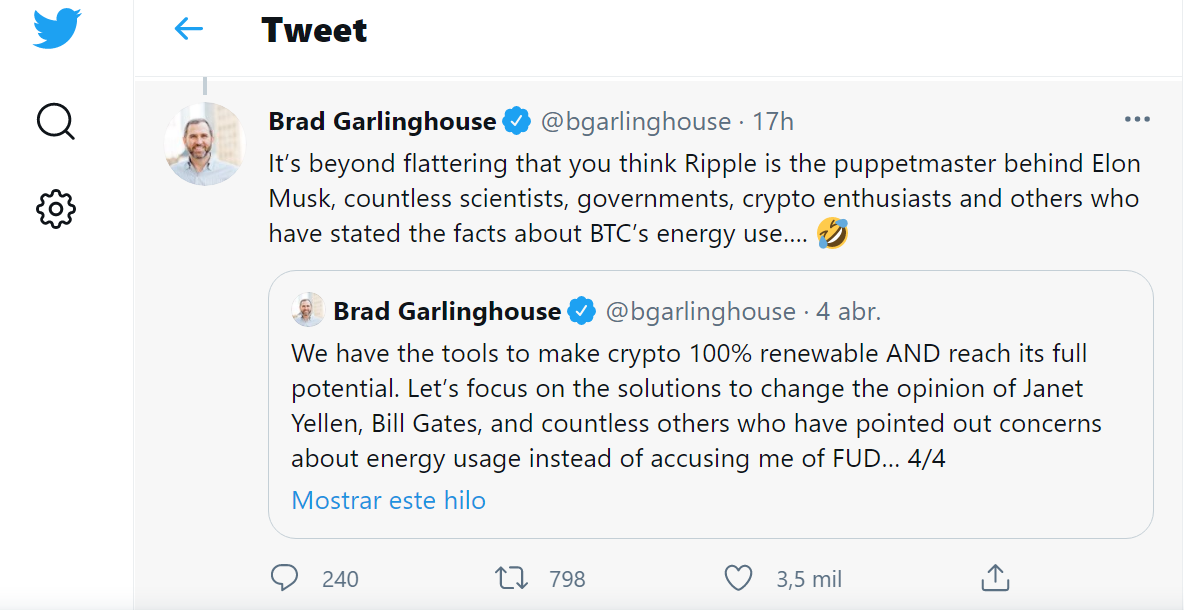 For this reason, BTC and other digital currencies dropped significantly after his statements.

“We have the tools to make crypto 100% renewable AND reach its full potential. Let’s focus on the solutions to change the opinion of Janet Yellen, Bill Gates, and countless others who have pointed out concerns about energy usage instead of accusing me of FUD,” Ripple CEO said in April.

Garlinghouse has remained vocal about his views on Bitcoin and its energy consumption during the last few months.

How the FUD Affects Bitcoin

FUD: This acronym comes from the English words "Fear, Uncertainty or Doubt".

A trader or investor may begin to experience FUD during a period when the price of a digital asset is plummeting. Let's take Bitcoin as an example.

If the price of Bitcoin suddenly begins to fall below its previous nominal value, altcoins usually follow. This can give way to a bear market and crypto enthusiasts will refrain from making further purchases.

Investors may start to fear that their capital is going to be lost, they will feel uncertain about where Bitcoin will go next and, they may even doubt that it will recover.

If FUD is the majority sentiment among investors and traders, they may choose to liquidate their assets, resulting in low liquidity and trading volumes.

Tell us what you think of this article and if you believe that the FUD is ethical or not.