Ripple breaks above the March 2019 triangle pattern to hit 34 cents. Will XRP hit higher prices in the coming days?

April 02, 2019. AtoZ Markets – The cryptocurrency market was a thrill on Tuesday. The market kickstarted a positive April with big surges in excess of 10% for many major coins. In just under an hour, Bitcoin gained 20%, Ripple surged by 9% and other majors also broke out of the March resistance levels. The surges were sudden, unexpected and obviously had a catalyst beyond the demand-supply day-to-day battle of retail trading. In April so far, the market has added over $20 billion to its capitalization and trading volumes have also surged significantly according to data available on coinmarketcap.

It has been observed that such a big move is usually preceded by a sideways pattern especially the triangle pattern. The triangle pattern was clearly seen on the Ripple price chart. The pattern started at 35.5 cents in February and continued throughout March. The pattern hits its low a bit below 30 cents and was at the brink of completion. A huge breakout was expected above 35.5 cents February high to 37-38 cents. There was also an alternative (shown in the chart below used in the last update) if the price is resisted below 35.5 cents. 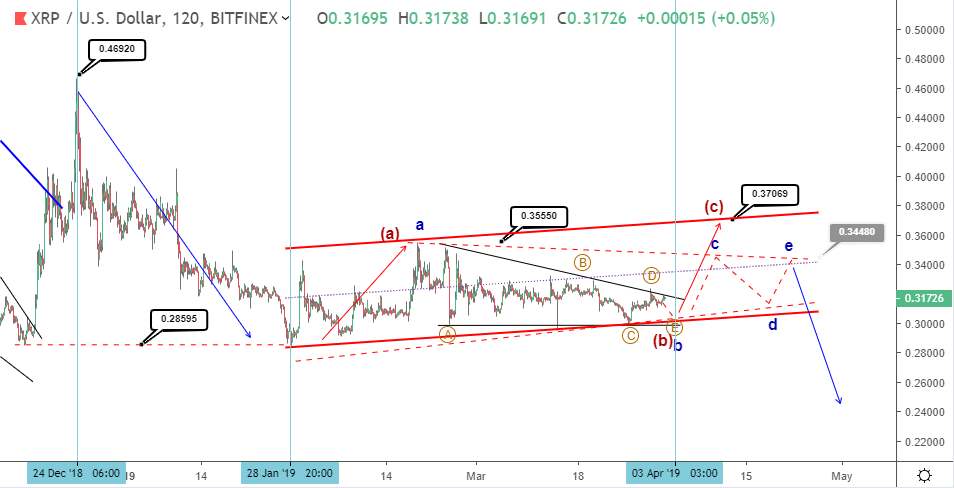 The last leg of the triangle ended shallower than expected before the price soared following a breakout as the chart below shows. The bullish target for this triangle is set at 37-38 cents although the XRP price could go higher.

Ripple price is getting close to 35.5 cents and should hit the 37-38 targets or even more. A big bullish break above the channel resistance line will give the bulls much advantage and set the crypto on course to total recovery.

Another leg to a new low?

In December 2017 XRP hit its all-time high, close to $3.3. To recover the over 90% loses that followed in 2018, the price will have to break above 45 cents and 77 cents to hit new multi-month highs. If this will happen, more fast surges like the current one are needed in succession.

On the other hand, if price enters the ‘quiet mood’ again, a larger triangle might continue below 35.5 cents which will most probably lead to another leg downside. Furthermore, as the current rally progresses, 37-38 cents should be watched closely as they might serve as resistance to the upsurge.