17 November, AtoZForex – The price of the Ripple has posted a double-digit advance this Thursday after the announcement of a major partnership with American Express. In fact, the crucial news has appeared as a great source of positivity for traders. The Ripple American Express Partnership will aim to process international payments.

The credit card giant American Express has partnered with Ripple and the UK banking firm Santander UK. The organizations are planning to collaborate on the creation of the Blockchain payments channel between the UK and the US. Apparently, the platform will reduce the settlement time for international payments from days to seconds. The platform is going to function on RippleNet.

Markets have welcomed the announcement with significant optimism, while the news has caused an immediate rally in the price of Ripple. Will Ripple American Express Partnership Boost XRP further? We do not know that for sure. Yet, our 2018 Ripple Price Prediction can provide you with some ideas.

In fact, the Ripple price has been trading flat at $0.212 for the most of the week. Yet, the value of XRP has spiked at about 13:15 UTC to $0.272. Moreover, the day-over-day trading volume of Ripple has risen four times. 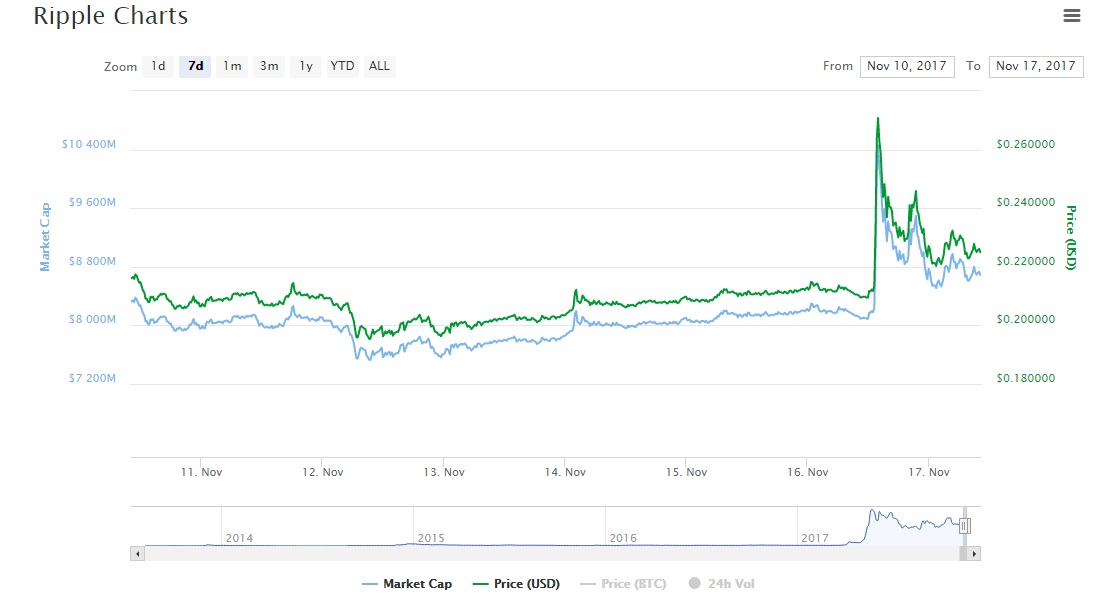 Afterward, the price of Ripple has lost some steam, with volume still going up. As of now, one XRP trades at around $0.224, which still stands for the 7% increase. The market capitalization of Ripple is now accounting for $8.7 billion.

The official announcement about the American Express Ripple Partnership has stated that Ripple’s real-time payments blockchain will be utilized to settle transactions across the channel. Yet, the announcement did not mention XRP in particular.

In fact, it is possible that companies can adopt the technology behind Ripple without integrating the XRP into the project. Even though XRP usage is proven to further reduce costs and transaction times, numerous firms still remain cautious about integrating Blockchain platforms that directly implies cryptocurrency usage.

The global head of strategic accounts at Ripple, Marcus Treacher, has stated:

“The technology we have developed, it separated a connection from the cryptocurrency or the token. So what that means is that a bank or non-bank like AMEX can use Ripple to connect and just exchange value from one fiat currency to another directly, without the need for any intermediate blockchain currency.”

As a result, there is no guarantee that the American Express international payments channel will actually integrate XRP. Thus, global investors should act carefully in regards to speculation on the future value of the Ripple cryptocurrency based on this announcement.