Bitcoin hash rate hits highs of over 50 million Tera hashes per second (TH/s). Will the cryptocurrency make a quicker recovery?

March 26, 2019 | AtoZ Markets – Bitcoin hash rate is peaking gradually despite price’s reluctance to hit above December high. The cryptocurrency market is making slight recoveries from their 2018 lows. Bitcoin raised hopes in December when it quickly gained 35% to hit above 4200. There were talks of recoveries but the crypto fell in January to 3400 before picking up in February and March. However, the rally in the last two months has not been significant enough to see prices fly higher that January high of 4250. In fact, the price has faced huge resistance at 4000-4100 since mid-March. Most of the price activities since the turn of the year have been as a result of the balance between demand-supply and the day-to-day market sentiments. This is not enough as there are short sellers who could still profit from drowning prices. The recovery needs a big trigger – a fundamentally driven one.

During the period of the bearish trend since December 2017, mining breakeven point was calculated to be $7,500. This means an average miner will breakeven if BTC price stays at $7,500. The 2018 plummeting run saw small miners gave up and packed up. Price has so far dropped below 7500 and it is expected that if this cryptocurrency will survive, the price should go back upside above the breakeven mining BTC price. The miners could have gotten their confidence back after the BTC hash rate rises significantly. What could this mean for BTC price?

A popular figure in the cryptocurrency industry, Dovey Wan, recently speculated that the current hash rate recovery is an indicator of increasing confidence among Bitcoin miners. 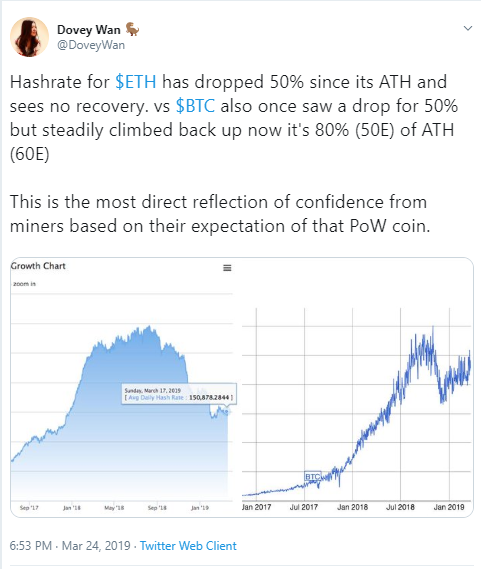 The cryptocurrency hash rate is now over 50 million TH/s. How much is the correlation between the hash rate and BTC price? Will Bitcoin price surge as a result of the increasing hash rate? 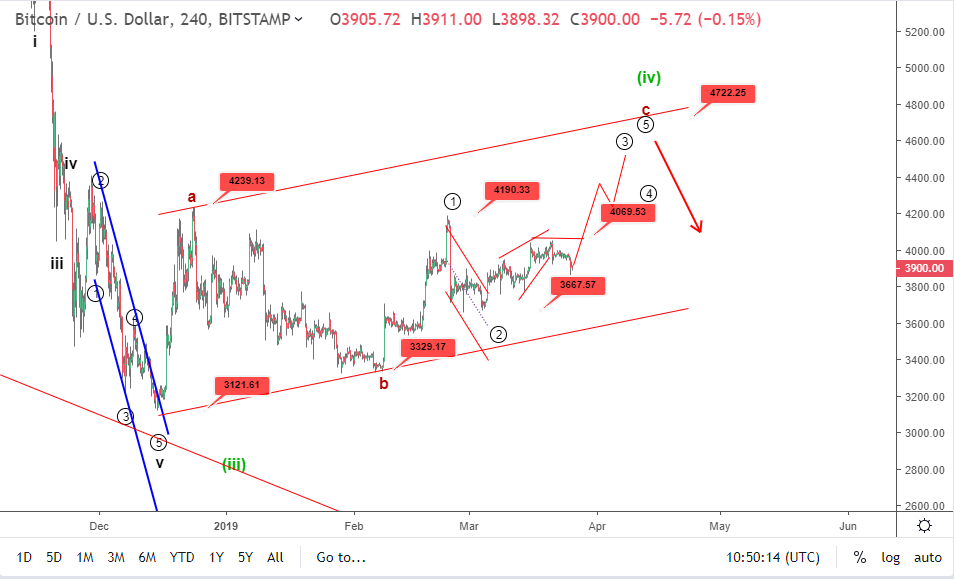 From the technical chart above, the effect of the increasing hash rate has not been seen yet. However, miners’ confidence is good for the market but might not result in the long term rally. In the medium-term, Bitcoin will most probably hit a new 2019 high above 4500 if the hash rate continues to increase. Price is currently confining within a range. High prices at 4239 (December 2018), 4190 (February 2019) and the current March high of 4069 will continue to act as barriers to the upward momentum. A big surge above 4069 is needed for the price to achieve the bullish target of 4500-4700. There are also three significant support levels – 3667, 3329 and 3121 formed in December, February and March respectively. A break below these levels will definitely lead to new lower prices.

How the increasing hash rate will contribute to the next price move remains to be seen. But there high bullish possibilities to a new high at 4500-4700. Afterwards, one more big drop to a new low could happen before the real recovery begins unless the current bullish run spikes above 5900-6000 zone.

Tags bitcoin mining Bitcoin technical analysis Cryptocurrrency
Forex Crypto
Top 5 Forex Brokers
Top 5 Crypto Exchanges
Your subscription could not be saved. Please try again.
Thank you for subscribing. You will be the first to receive all the latest news, updates, and exclusive advice from the AtoZ Markets experts.
Everyone is reading
Top 5 Forex MT5 Indicators for 2021 you should try
Top 5 Cryptos to Watch in Quarter 2 2021
Bitcoin Facing Resistance Around $60,000 Event Area - What Next?
close ×