One of the most promising cryptocurrencies has experienced a drop in its value – Lisk coin has depreciated to trade around $8 currently, down from $10.59. What are the reasons for Lisk price drop? Let’s find out.

24 November, AtoZForex – Fourteenth biggest cryptocurrency in terms of market capitalization, Lisk, has been on a steady rise until now. The coin has appreciated from the low of $4 to a high of $10.59 earlier, only to drop to almost $7 later on. What has caused such a rollercoaster in Lisk price?

As of now, Lisk is trading at around $8, with its market cap standing at $920 million. This year, Lisk cryptocurrency observers have been awaiting a rebranding. In fact, the rebranding date has been announced at the meeting in Berlin that took place recently. The team behind the Lisk has decided to officially rebrand the cryptocurrency on the 20th February 2018. 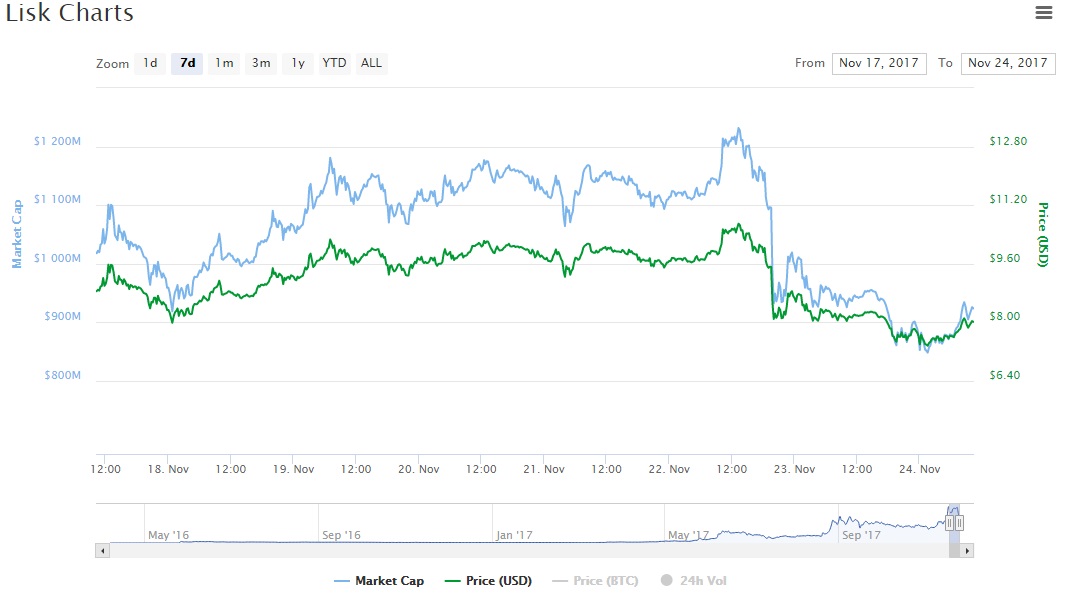 Why did Lisk price drop?

According to the market insiders, exactly this was one of the reasons for Lisk price drop. Even though the rebranding date is just some three months away, the bullish market has been weighed on and the bears have taken over the stage. The massive Lisk sell-off has started on Bittrex.

In fact, one of the marketing efforts, the upcoming rebranding is most likely to provide the coin with the boost in value. A lot of traders and investors are looking forward to this event, as they have high hopes for the cryptocurrency. Yet, there are also speculations that the price of Lisk is controlled by whales. Whales are the big market players that have the huge influence on the market at times.

Following on this, one of the Reddit users, ChrisTroy has published a post some hours before the Lisk price drop:

“Since 48 hours, someone is manipulating the $LSK price/trade on Bittrex. The guy(s) currently doing this have massive amounts of $ as well as $LSK and are manipulating the whole market since Monday afternoon. Your classic whale. They are working with bots and Bittrex does, unfortunately, nothing against this kind of manipulation.”

Furthermore, there was some skepticism in regards to the Berlin meeting as well. Users mentioned that the meeting was “over-hyped” and did not bring much of concrete news. Others called the meeting not that “professional” in outlook.

One of the users has shared:

“Rent a real auditorium when you are making an announcement. It’s embarrassing to say the least that time and money were not invested in your presentation. If you steam the video from the computer connected to the projector your online audience will be able to follow along much better and it will not look like something that was set up in your basement. The screen was washed out and hard to read. (Look up Ethereum meeting Nov 2016) – please learn from this.”

“Glad I sold my 73,000 lisk two hours ago. I’ll buy back in after this dump is over. Enjoy the Endless “Soons” that every other failed coins have given us.”

Yet, there is still a lot of positivity around the Lisk price dip as well. For instance, long-term Lisk holders and backers have perceived this move as an opportunity to purchase coin for a cheaper price ahead of the rebranding event.