Bitcoin price has passed the new historic level! Following the breaking news, we present to you 3 reasons behind historic Bitcoin price above $2,000.

22 May, AtoZForex – The cryptocurrency Bitcoin has reached new all-time high level – the digital currency had passed $2,000 mark for the first time ever. Bitcoin has advanced almost 65% during April, leaving the gold value way behind.

As the digital currency Bitcoin has surged beyond $2,000, we decided to understand the reasons behind this crazy shift. Why is the cryptocurrency’s value climbing up so headily lately? We present you 3 reasons behind historic Bitcoin price above $2,000. 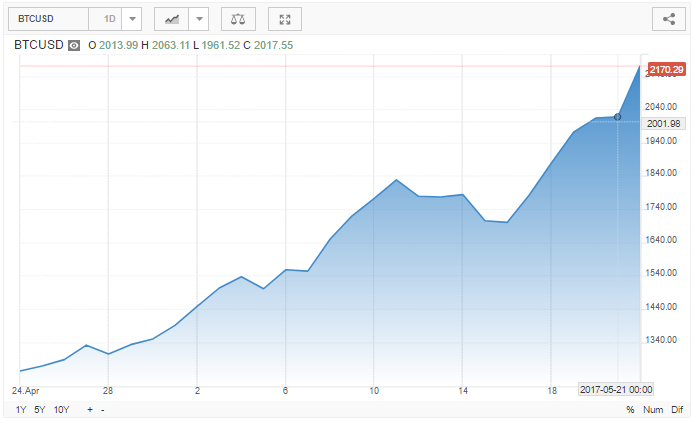 One of the key reasons for historic Bitcoin spike above $2,000 is the wide trend of growing appetite for the cryptocurrency. Digital money now is perceived as the common thing in the community. Prior to that, only the computer geeks were largely involved with Bitcoin.

Moreover, people, these days see Bitcoin as a valuable asset, just like gold. Investors believe that the cryptocurrency is able to withstand high volatility in uncertain times. In addition, this digital currency may be benefiting indirectly from the surge in popularity of other cryptocurrencies – Lumens, Ethereum and Litecoin. Where these currencies are also able to deliver the same results as the Bitcoin, it is presently easier to use the latter.

All of the above mentioned has led to the globally increasing demand for Bitcoin.

In the beginning of April, Japanese authorities have introduced new rules for Bitcoin. The new framework has outlined the key norms for Bitcoin that have classified it less like an outlaw currency. The authorities have decided to treat cryptocurrency more like a part of the banking system. Such initiative has caused a spike in the trading activity, where a large number of investors rushed to exchange Yen for Bitcoin.

If you are following the Bitcoin story for some time now, you might know that it tends to be quite unstable. However, the crashes in Bitcoin price are almost always followed by immediate surges. Just like that, when the value of this digital currency drops, the myriad of online sources are publishing news about it, which creates a hype around Bitcoin. The increased attention around the cryptocurrency eventually leads to the spike in price.

Market experts say that presently, the Bitcoin is in the middle of its hype cycle. Millions of online sources are reporting the surge in digital currency’s value, thus attracting more investors.