After all, our 2018 Ripple Price Prediction might come true, considering the latest XRP moves. While the cryptocurrency advances its positions by more than 80% in the past day, we look into the key Reasons Behind  Ripple Price Surge.

13 December, AtoZForex – Once again cryptocurrency market has shown how unpredictable can it be. Just yesterday, we have reported that the right to be called the 4th biggest cryptocurrency in the world by market cap was overtaken by Litecoin. Today, we see another leader – Ripple. Its market cap now is accounting for $18,756,331,761.

The price of this promising coin has spiked 80%, while now the value of XRP stands at $0.485995. This level marks an all-time high for this digital currency. What are the reasons behind sudden Ripple price surge? 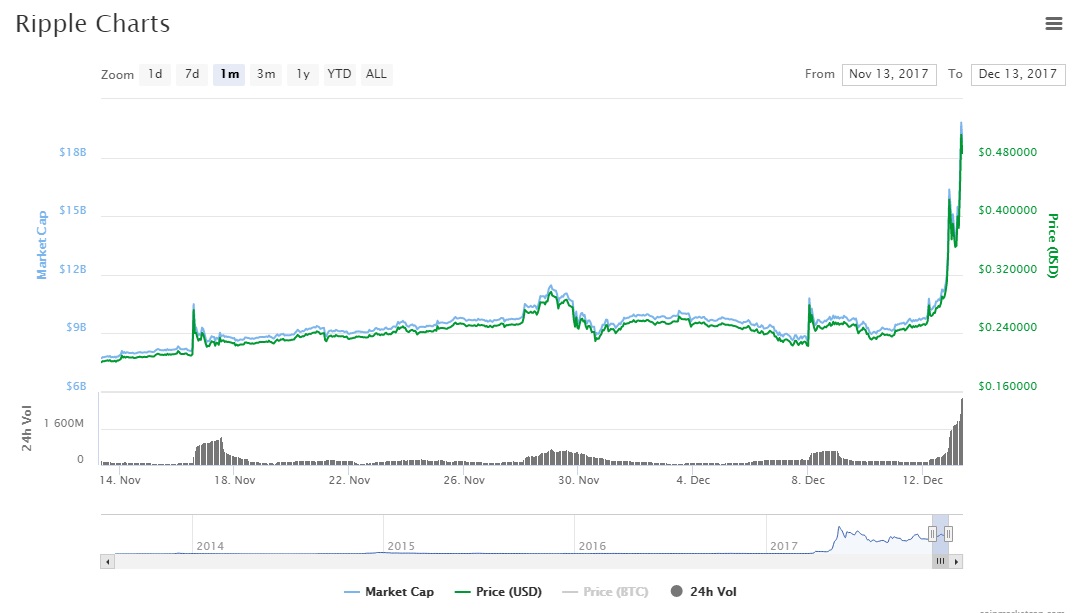 It is believed that the key driver of the XRP price is the latest craze around Bitcoin Futures by CBOE. As the king of the top cryptocurrencies has been on the rally, many altcoins have followed the trend. Many industry insiders believe that Ripple got involved in the upward trend, too.

Another possible reason for Ripple price increase is the possible Blockchain technology tests by Japanese and South Korean banks. The technology will be coming from the San Francisco Fintech firm. The tests are scheduled to start this Friday.

The key aim behind the tests is to achieve the same-day worldwide fund transfers while simultaneously cutting costs by 30%. SBI Ripple Asia is a leader of a group of 61 Japanese banks that will be taking part in trials. As for the South Korean side, the Seoul-based Blockchain solutions provider will be responsible for the tests.

In case tests will show positive results, the Ripple blockchain transfers between South Korea and Japan will be launched next year’s spring.

In fact, Ripple has been somewhat left behind all the cryptocurrency boom. The last time it has shown any serious movements was in May 2017 when the digital currency has hit $0.40. Moreover, this May has been quite a successful month for the cryptocurrency market – the majority of coins have got a boost during this month.

However, past May, Ripple has been slowly and steadily dropping back towards the $0.22 level. It has stayed there for months. As a matter of fact, the most active sessions have been fueling the price of Ripple to maximum $0.27 level.

Will the Ripple reach $2.00 by the end of the next year? This we will still have to see. What are your thoughts? Let us know in the comments section below.