AtoZForex.com Lagos — The first key news for the week was the Australian building permits, which came at 14.4%, much lower than anticipated. The result shows that the country may very well be in a bubble. This prompted Treasury Secretary John Fraser to comment that: “It does worry me that the very, very low — historically low — levels of interest rates are encouraging people to perhaps over-invest in housing.” Australia’s major banks have said they will take steps to ensure a curb in growth of home loans to investors after the country’s financial services regulator asked lenders to limit expansion of these mortgages to 10 percent a year. 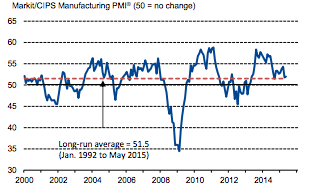 The expansion in UK Manufacturing PMI came less than economists’ estimates due to falling foreign demand. Although an expansion from 51.8 recorded last month, this month’s 52 release shows the country’s dependence on domestic demand while an economic recovery has yet to gain momentum in Europe, its biggest trading partner. According to markiteconomics, the UK manufacturing sector saw further modest expansions of both output and new orders in May, as a solid domestic market continued to offset lacklustre demand from overseas. The consumer goods sector remained the stand-out performer, while investment goods producers fared better than in April. Negative news came from the intermediate goods sector, where the downturn in output continued. This is in line with last weeks data which showed that exports led to a slowdown in activities in the first quarter of the year, with net trade dragging the gross domestic product growth down by 0.9%. This put the aggregate economic expansion at 0.3%, the slowest growth since 2012. The pound ended the day lower against the USD for a seventh day.

The US ISM Manufacturing PMI came positive at 52.8, showing that factories activities improved as orders increased at the fastest pace in five months. This adds to positive news for the USD as it ended the day stronger again.

As expected, the Reserve Bank of Australia left its cash rate unchanged at 2.00%, a record low, after the cut from 2.25% last month. RBA Gov. Glenne Stevens defended the decision by saying: “Monetary policy needs to be accommodative” as the economy is likely to operate with spare capacity “for some time yet,” he said in a statement. This puts the policy makers in waiting mode in observance of how the economy develops to make further changes to the key rate in due time. The Australian dollar strengthened about 40 pips against the USD after the release after the RBA cash rate release.