Historically many people preferred using gold backed monetary structures as central banks always tend to print more money. Well, it is just a matter of clicking a button and watch the “magic” happen if you don’t need any Gold to back your currency, no?

We have seen the US Fed doing it, the Japanese doing it and finally it is the European Central Bank’s turn finally came. While many of us were discussing 500 to 600 billion Euro Quantitative Easing possibilities the ECB announced large-scale quantitative easing with double the expectations: 1.1 trillion Euros after the footsteps of the US FED hoping for US like “recovery”.

Here is what ECB’s QE will cover:

But is this what Europe needed? This is the main question to start with. Was there a fund shortage in the European banks?
On these exact questions, Sabine Lautenschläger, a member of the ECB’s Executive Board, shared her opinion that European banks already had enough cash before the Quantitative Easing announcement too but they aren’t lending due to their bad loan fears because of weak regional economy. 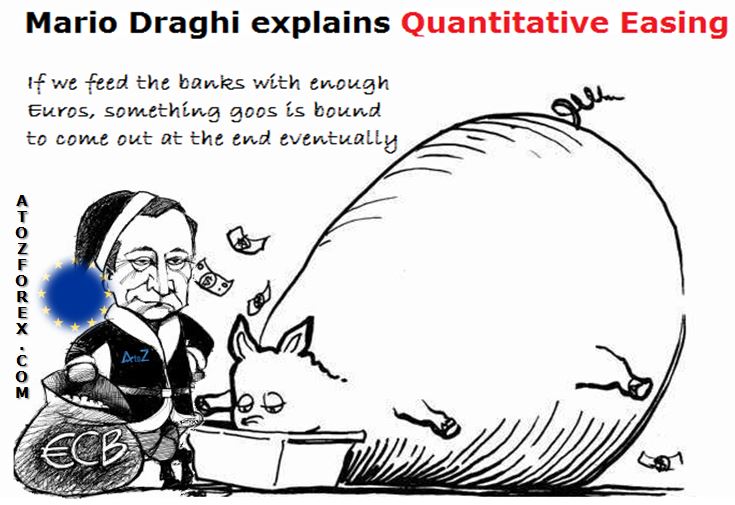 So what is the purpose of QE and what should we expect of it?

From their inception Central banks always believed that they are responsible for keeping inflation in check and no inflation meant no economic development. Prior to 2008 financial crises central banks controlled inflation rate by playing with overnight borrowing interest rates. During fear they would reduce their interest rates which would encourage banks to lend more, hence avoid the economy from falling into recession. Central banks would do the opposite when the inflation would go out of control.

However when 2008 crisis hit the world, leading central banks could not sustain their inflation targets by only cutting interest rates. They started to check for “innovative” crisis management techniques in order to encourage banks to pump money into the economy.

What other method than creating money that does not exist would appeal to these central banks. Therefore Quantitative Easing was born.

To be able to apply Quantitative Easing, Central Banks started to “create” money by purchasing government bonds and other securities from banks, with electronic cash that did not exist before. According to the theory the newly created funds would increase bank reserves. Just like every other economic sphere supply and demand equation would take control. Freshly pumped capital reserves would encourage banks to lend more, buy new assets which would in return stimulate the economy. In short, QE aims to show how determined a central bank is to fight deflation and create confidence in the national or regional economy.

The world has seen a number of QE attempts since 2008. After three rounds of QE in the FED managed to relatively stimulate the American economy, bring their unemployment levels close to their targets as well as their inflation targets. Japan, however has not been much successful. In the UK, the BOE bought gilts from financial institutions, along with a smaller amount of relatively high-quality debt issued by private companies.

What shall we expect from ECB’s QE program?

It is not the QE right now the ECB is following, but Greek developments and possible Greek spills to other troublesome European countries such as Spain and Italy. Syriza’s victory in Greece already encourages those of similar parties to push more with their anti-austerity plans. Syriza declining to collaborate with troika and demanding debt relief will ultimately become a big problem for Europe and seems like only one to benefit from these developments will be Russia as any “

” would lead Greek leftists collaborate with Putin administration who has been under strict sanctions due to Ukraine crisis.
Hence as it can be seen, at this moment, ECB’s QE program seems to come a little too late and Euro will be under further pressure for the months to come.
Read next:

“Eurozone rules to be respected” comments IMF’s Lagarde on Greece

Best Forex Trading Signals for 2021
Forex Crypto
Top 5 Forex Brokers
Top 5 Crypto Exchanges
Your subscription could not be saved. Please try again.
Thank you for subscribing. You will be the first to receive all the latest news, updates, and exclusive advice from the AtoZ Markets experts.
Everyone is reading
Ripple Agrees to Provide SEC with Company Records
Cryptocurrency Market-Experts Make New Predictions
FCA Publishes New Strategy to Scams and High-Risk Products
close ×