As Putin meets Ethereum founder to create Russian Digital Currency the cryptocurrency world closely watches the Ethereum Bitcoin market share. Is Russia going to be the first country to move away from the fiat currency model? 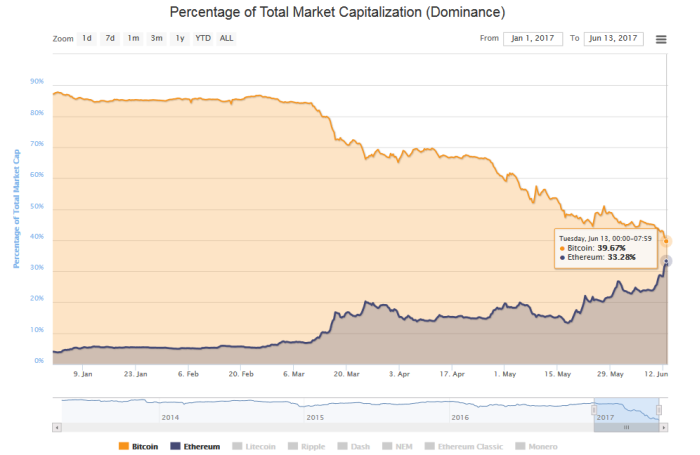 Meanwhile, Ethereum success story as one of the top cryptocurreny to invest has caught another world leader’s attention. That leader is no other person that the Russian President Vladimir Putin. Putin has been trying to move away from the USD dependency. Hence reading the news with the title that Putin meets Ethereum founder to create Russian Digital Currency should not really be a surprise.

Meanwhile, according to the sources Russian Central bank has already initiated their Ethereum pilot project. The Russian Ethereum pilot project covers online payments as well as customer data verification with Russian lenders. The main point to emphasize is that Russian authorities are not ruling out creating an Ethereum based Russian digital currency.

Russian Central bank’s pilot project is NOT the first Ethereum technology in Russia. Indeed, Russian State Development bank VEB has already agreed to use Ethereum technology for some of their administrative functions. This also signifies the battle toward being the first country to implement blockchain governance. Maybe I am rushing too much?! Who knows?!

Let’s assume that Putin met Ethereum founder to create Russian Digital Currency, and they came to an agreement. If Russia would move as fast as this news signal, we could see Russian economy to become the first major global economic power to transfer their economic and financial backbone to Blockchain technology. Ethereum based digital governance and Ethereum based Russian digital currency.

Can we conclude that Putin has endorsed Ethereum by meeting Vitalik Buterin?

I don't beleive that anybody would disagree with this. Thus, there is a direct Russian impact on Ethereum prices.

Hence, Russian impact on Ethereum prices will be massive. Just yesterday Ethereum price has hit $410+ levels. Indeed we are projecting to see Ethereum prices to go as high as $550 as an initial Ethereum Price Forecast. It is like the use of internet and computer technologies. There was a time when we said that computers are for scientists, now, they are everywhere. So, why would blockchain technology and cryptocurrency not replace the money as we know?

Final comment on Ethereum price fluctuation:  such level of fluctuation is not common in financial world as we know. However, since the Crypto coins are at their infant stages we could still expect further fluctuations in the market. It should continue until there is equilibrium.