Bitcoin has remained in the sell-off zone with unable to trigger a big recovery. There are price patterns emerging that show the sell-off might continue below $2000.

March 13, 2019. | AtoZ Markets – The cryptocurrency market has turned silent yet again, unable to add to the over $30 billion increase in total market cap in the last three months. If we can still remember, such corrective sideways move like this happened more than once last year. Between March and November, there was a 9-month battle between the bears and the bulls as they push prices within a wide range. Bitcoin and the altcoins finally fell after a breakout, to hit their 2018 lows.

Bitcoin hit 3100 before entering into what many considered could lead to the next bullish phase. However, looking at the chart properly, same price behaviours as seen last year, are currently being exhibited since December 2018. It does, however, implies that Bitcoin and the altcoins have not hit their bottom yet.

Since the current rally started, Bitcoin peaked at 4200 in December when price bounced off 3100 low. In the last three weeks, the BTC price has strived to break above 4000-4200 but has been unsuccessful. The bears are pushing downside while the bulls are resisting and the price pattern goes sideways. The current sideways move has been narrowed down to two possible patterns as explained in the last update. A potential zigzag or triangle pattern – the latter is more likely, might develop. The chart below was used in the last update. 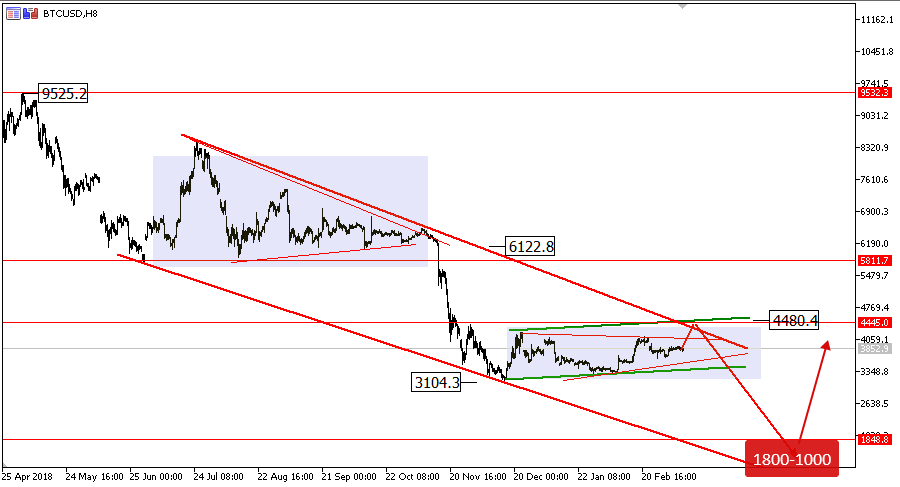 In the last update, we set a price roof and floor at 4500 and 3100 respectively. If a zigzag develops, the price will rally further and attempt to break above 4500. Another possibility is a sideways triangle which suggests price might not even get to 4200-4000 before breaking downside to 1800-1000. The charts below focus on the intraday wave analysis of the current rally with the possibility of a zigzag or triangle. 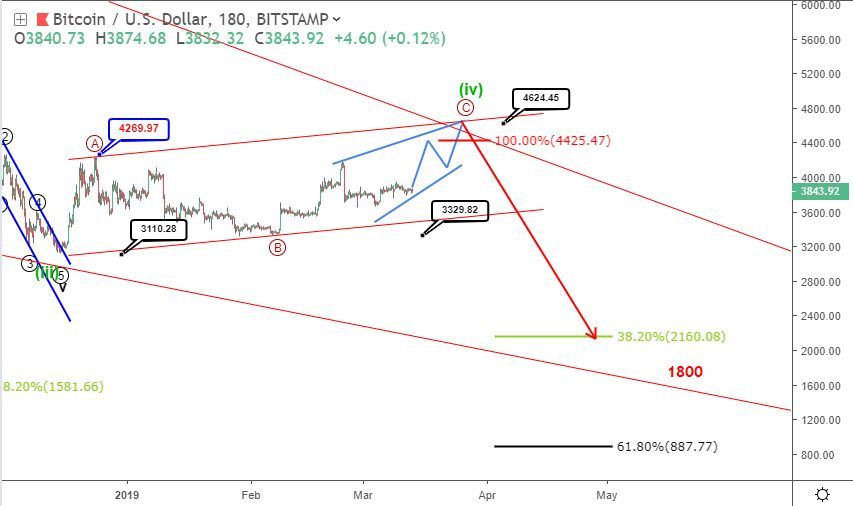 The chart above shows the prevailing rally from 3100 with the possibility of a zigzag pattern completing at 4400-4600. Wave c is expected to be an impulse wave or an ending diagonal. With the move already done, a diagonal c is more likely. At the end of the pattern, if the price drops quickly below 4000, further dip to 2000 or 1800 will most likely follow. If 3100 is the low, a fast break above 4500 into the 5000-6000 territory is required.

A triangle sideway pattern below 4000? 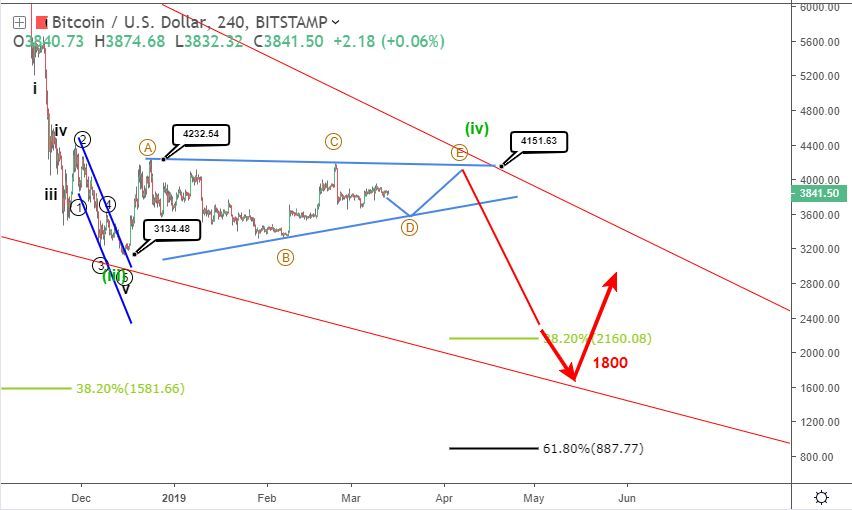 The sideways move could continue till the end of April before a bearish breakout in May after the completing a triangle pattern. Breakouts that follows triangles are often in the direction of the prevailing trend which is bearish in this case. Downside target is 1800-2000. Bitcoin is probably not far from bottoming. It might be one more bearish swing away.