Gold is close to breaking above 1450 as the NFP draws near. The following technical analysis is based on the Elliott wave theory.

August 02, 2019 | AtoZ Markets – The US Bureau of Labor Statistics will issue its employment situation for July 2019, today. The Non-Farm Payrolls are expected to rise by 164k which is less than June’s 224k. The unemployment rate is expected to remain at 3.7% while the average hourly earnings will rise by 0.2% in July just as it was in June. Normally, the actual often deviates from the forecast, especially for the Non-Farm payroll data. However, what is more important is the difference between the actual data and the market’s consensus expectation. If the deviation comes at 50k or more in whatever direction, USD is expected to spike accordingly. Gold should bank on disappointing data to gain more bullish momentum. The upside risk looks limited unless the data is extremely disappointing i.e having a very wide negative deviation.

After being supported at 1400 on Thursday following President trump’s new tariffs sanctions on China, the yellow metal advanced and recovered from the Fed-induced Wednesday dip. Price is now looking forward to a new high with 1452-1450 staying as the only barrier. Meanwhile, the rally is expected to be limited at 1460.1465 resistance zone where an important price pattern is about to end.

If the NFP is extremely less than expected, a break toward the 1500 psychology level is a possibility. To the downside, the price could be rejected from advancing further at the resistance zone. 1400 remains the battle line between the bulls and the bears. A dip below 1400 could set the precious metal toward the 1300 psychological level 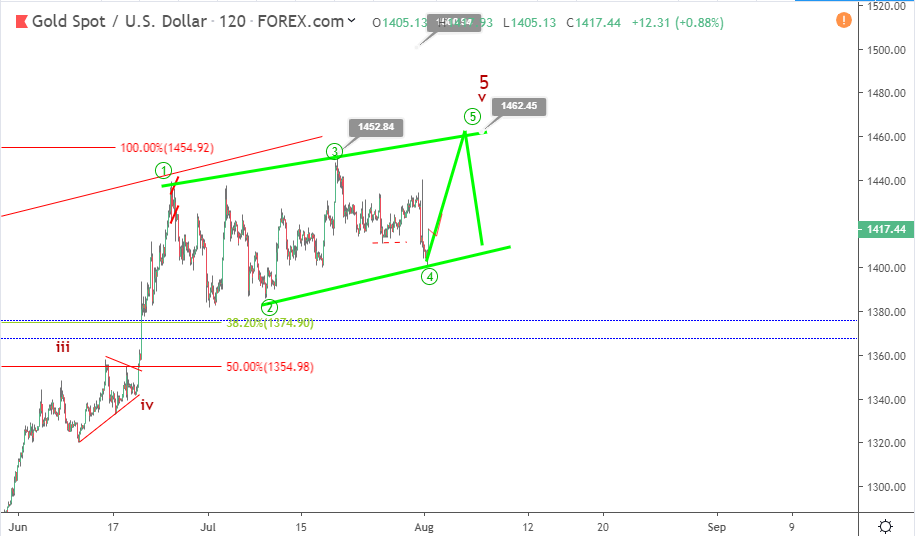 The alternative scenario was invalidated by the current sharp surge leaving us with this. The chart below shows the scenario is playing out well. 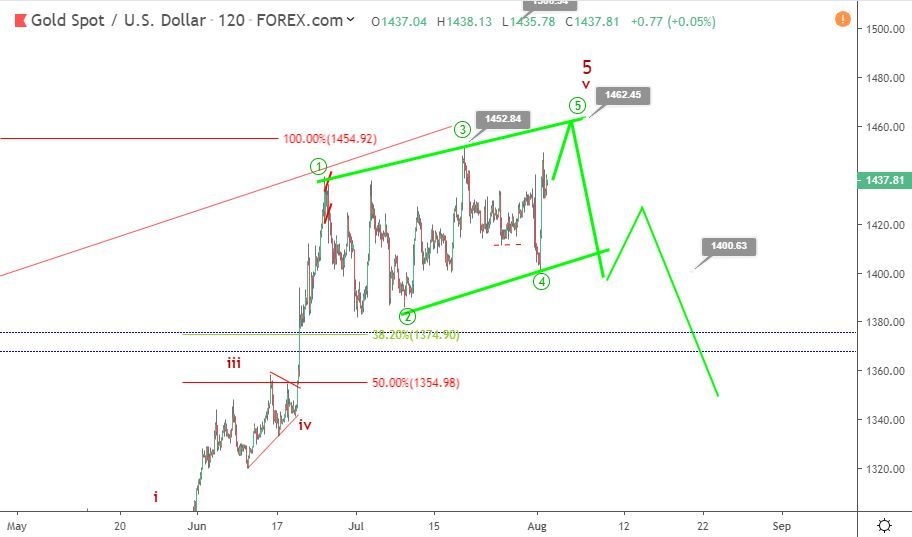 If the ending diagonal ends as expected, a fast dip to the 1375-1368 zone and even the 1300 handle is very much likely. We will have to see what the NFP brings to the table to make of this picture.