Gold quickly rallied above 1300 early in the London session. The following looks at the most likely scenarios based on Elliott wave theory.

March 18, 2019. | AtoZ Markets – Gold has gained positive traction early on Monday despite the lowly positive tone on the U.S Treasury bond yield. It rallied from Asia’s session low at 1298 to hit the highest price so far this week. The zero-yielding metal is meeting fresh demands after new uncertainties concerning the US-China trade deal following news that talks are now postponed till April. The US bearish run since last week is also uplifting the dollar-denominating commodity to break above the 1300-1302 technical resistance belt.

Meanwhile, the current bid will be limited as investors might be wary of Wednesday’s FOMC meeting. The FED will give updates on their monetary policies. Rates are expected to be kept unchanged but an upbeat tone might raise the demands for the greenback thereby dragging the yellow metal to a multi-week low.

After it dropped to 1298 in the Asian session today, Gold has been bullish with a lift to 1304, breaking above 1300-1302 intraday resistance. Gold is now between 1311 and 1292 intraday resistance and support levels respectively. If the bullish momentum is not strong enough to push above 1311, the bearish run will resume below 1311 to set the commodity to its lowest price in 2019 before the FOMC. However, the FOMC might be the trigger price needs to determine the next direction.

Gold has been on a huge bullish run as a safe-haven commodity since the uncertainties around the Dollar following the trade wars between the US and China. The bullish run from 1160 is printing an impulse wave on the price chart of Gold. The current dip started at 1346-7 in late February. We identified this dip as the 4th wave of the bullish impulse wave from 1160. However, the dip from 1346-7 to 1280 looked more like an impulse wave. Therefore, we labelled it as the first leg (wave a) of a deeper corrective 4th wave in the last update. 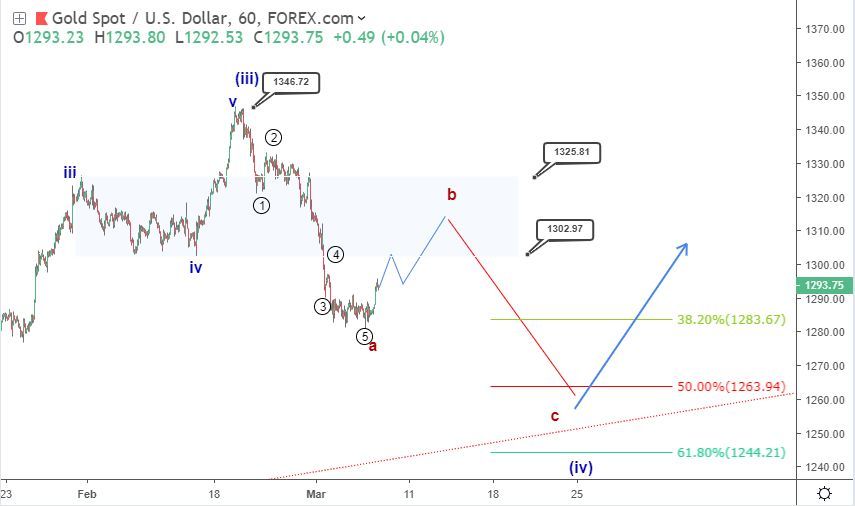 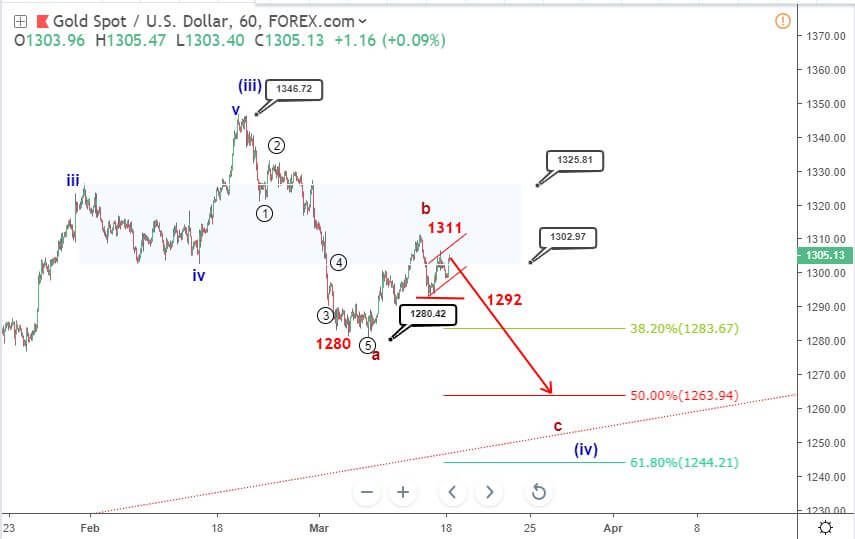 The chart above shows the possible end of wave b at 1311. Wave b could take a higher price above 1311 if the current rally stays above 1292. However, short term sellers could look for opportunities below 1292 where wave c could begin up to 1263 or below. Gold is still under short term bearish pressure until price advance further into the neck of the 1240-1346 free zone.

Tags Elliott wave analysis FOMC meeting gold price forecast
Forex Crypto
Top 5 Forex Brokers
Top 5 Crypto Exchanges
Your subscription could not be saved. Please try again.
Thank you for subscribing. You will be the first to receive all the latest news, updates, and exclusive advice from the AtoZ Markets experts.
Everyone is reading
Top 5 Forex MT5 Indicators for 2021 you should try
Top 5 Cryptos to Watch in Quarter 2 2021
Bitcoin Facing Resistance Around $60,000 Event Area - What Next?
close ×