The UK banking sector sees fintech startups as a “significant threat” to the big players in the industry. This is based on the a MoneyLive Banking Report consulted with 600 leading figures from the banking sector.

December 27, 2018 | AtoZ Markets - A new report that was recently published by MoneyLive Banking Report, reveals that banks in the United Kingdom are apprehensive about potential disruption from fintech startups.

The report, compiled by Marketforce LIVE, surveyed 600 top financial institutions in the country which sees the startups as a significant threat to their business models.

The report polled respondents with the aim of finding out how traditional financial institutions view the growing presence of services that are provided by fintech firms in connection to their existing clients base and future business prospects.

As per the data presented, eighty-one percent of the respondents were of the opinion that when it comes to large financial institutions, superior customer experience and service quality are more important than trust. These two factors were considered the biggest drivers of acquiring and retaining consumers.

In addition to the problem faced by U.K. banks is the fact that seventy-nine percent of them believe that fintech startups have more engaging brands.

Moreover, fifty-nine percent of the respondents concluded that customer-facing fintechs startups had the potential to entirely replace them or at least pose a ‘significant threat’ to their relationship with clients if they don’t substantially change their models in the near term. The threat posed to the U.K. banking sector is illustrated in the graphic below. 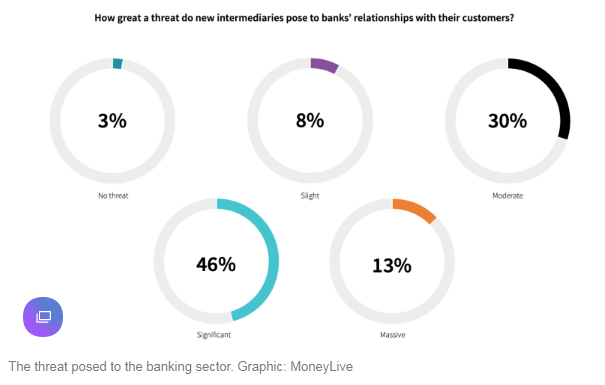 An excerpt from the MoneyLive banking report reads as follows:

"Almost six out of ten (59 per cent) of the bankers we surveyed perceive new intermediaries to be a significant threat to their relationship with their customers…From Amazon to Airbnb, Netflix to Uber, the story of digital disruption has not ended well for those incumbents unable to match the personalised experience and compelling cost savings of the newcomers."

Who Benefits From Fintech Disruption?

When it comes to brand messaging, seventy-one percent of the survey respondents have also agreed that many banks had not kept pace with consumer priorities in terms of convenience, speed, and simplicity.

In spite of this, the report does not reveal that there is a consensus regarding what the future of banking services will be after fintech critical mass disruption is achieved.

Meanwhile, thirty-one percent of those polled are of the thoughts that challenger banks would benefit the most from the disruption while thirty percent were of the opinion that fintech startups taking over from banks. The banks at the moment, expect fintech adoption to continue racing toward a critical mass of majority usage as the figure below illustrates. 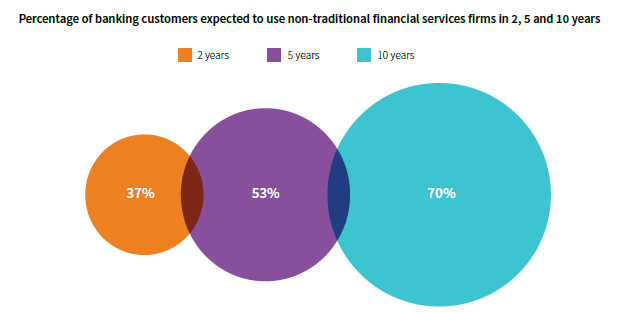 Based on the perceived threat, ninety-three percent of respondents concluded that over the 5 five years, their business, as well as revenue models, will have to undergo some fundamental changes if they must survive and co-exist with fintechs.

Tags Amazon Uber UK Banks
Forex Crypto
Top 5 Forex Brokers
Top 5 Crypto Exchanges
Your subscription could not be saved. Please try again.
Thank you for subscribing. You will be the first to receive all the latest news, updates, and exclusive advice from the AtoZ Markets experts.
Everyone is reading
Is Forex Trading Halal or Haram in Islam?
Top 5 cryptocurrencies 2021 | Best Cryptocurrency To Invest
How to Setup Monero Mining in 2021?
close ×