Get VIP Trading Signals Market Watch
Trade Now Your capital is at risk.
A look at the current Bitcoin chart shows that the past few days have only been for die-hard crypto enthusiasts. Within a few days, Bitcoin lost over $6,000 in value and tested the patience of many investors. While cryptocurrencies have always been known for their volatility, such a crash in such a short period of time is rather unusual. Reason enough to start looking for the possible reasons.

In late autumn 2021, there was still a great joy when Bitcoin cracked a new all-time high after several years and peaked at almost $68,000. A little over half a year later, this euphoria seems to have evaporated completely.

Bitcoin has been on a real descent in the past few days. It went down from $40,000 on May 5 to below $30,000. The largest cryptocurrency by market capitalization thus suffered a textbook crash. The question of the possible causes of this drop in prices quickly arises.

Bitcoin in free fall – Why actually?

Anyone who is currently dealing with the stock market landscape outside of the bitcoin and crypto market will have noticed that the general mood is not particularly positive at the moment. Many tech stocks on the stock market have only gone down recently. There is global macroeconomic uncertainty, which is not necessarily attracting many investors at the moment. The corona-related monetary policy of many countries drove up inflation rates. Headlines of inflation rates at record levels graced the home pages of business portals with all regularity.

The United States Bureau of Labor reported that the consumer price index rose to 8.5% - the first time in 40 years a new record. The Federal Reserve responded by raising general interest rates by 0.5%. Many investors are unsettled and liquidate their risky investments first. It is logical that this primarily affects speculative stocks and cryptocurrencies. A look into the past shows that this is not unusual in times of crisis. Therefore, this is the most likely reason for the current sell-off and high loss of bitcoin.

Above all, short-term large investors who bought their coins just a few weeks ago are fleeing the market again. The so often quoted "Bitcoin Fear & Greed Index", which shows the current mood in the market based on various factors, currently shows "Extreme Fear". Accordingly, market participants are currently acting very cautiously and are more inclined to sell their holdings. Recognized experts suspect that investors are just waiting for a so-called "capitulation wick". This describes a deep red candle on a candle chart, which represents a sharp drop in price.

The whales leave the usual waters

Since Bitcoin has gradually moved away from its last all-time high, there has been speculation that such a price level will not be seen for a long time. Current figures from Glassnode show that large investors – so-called whales – are also withdrawing from the market. Inflow volume on major crypto exchanges surged to a 3-month high of 1,755,021 BTC. This suggests that the whales are selling their stocks and are likely anticipating a prolonged dry spell. The pure number of Bitcoin Whales is also steadily decreasing.

Above all, short-term large investors who bought their coins just a few weeks ago are fleeing the market again. The so often quoted "Bitcoin Fear & Greed Index", which shows the current mood in the market based on various factors, currently shows "Extreme Fear".

Accordingly, market participants are currently acting very cautiously and are more inclined to sell their holdings. Recognized experts suspect that investors are just waiting for a so-called "capitulation wick". This describes a deep red candle on a candle chart, which represents a sharp drop in price.

It would be nice if at least the technical indicators spread cause for optimism despite the bad mood. Unfortunately, that is not the case at the moment either, and it is the third reason for the current drop in prices. The Bitcoin price closed in the red for the sixth week in a row and the seventh week also started negative. That hasn't happened in over eight years, which underscores just how bad the mood really is. 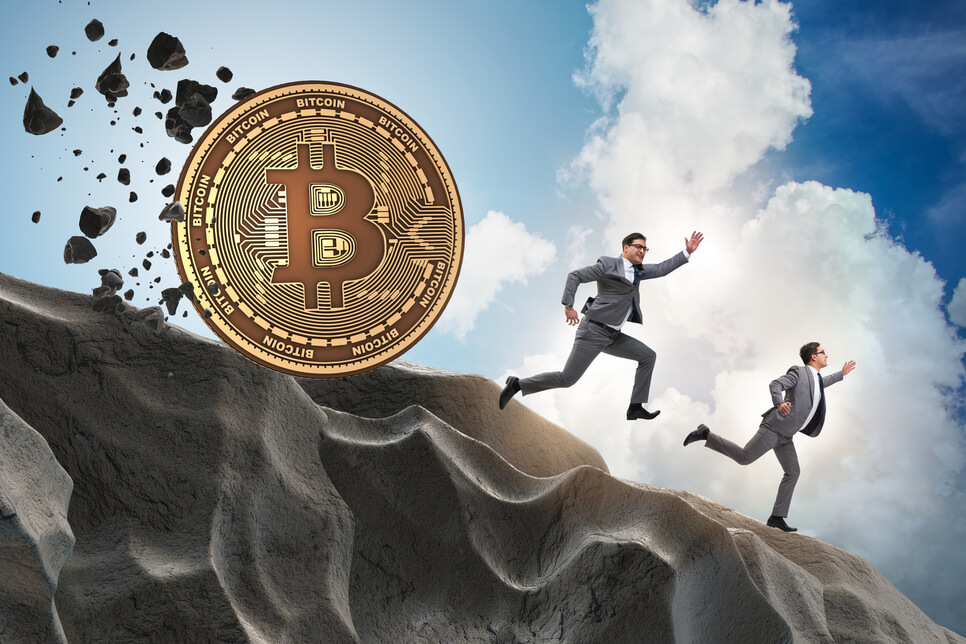 CryptoQuand analysts have found that the Fees to Reward Ratio for miners is currently at an all-time low. Well-known analyst Caleb Franzen also believes that investors "have to expect more pain". However, he expects investors who embrace the current situation "will be best off over the long term."

Many of you are waiting for the #Bitcoin 'capitulation wick'.

If it happens, and it really is THE capitulation wick, the majority of folks won't step in a buy it because the fear will be too great.

This is the way it always is, and always will be.

Tip: have a plan, stick to it

Different perspectives on the current situation

While many investors are rushing out of the market and selling their assets, some familiar faces from the crypto world are appealing to investors' "Diamond Hands". Barry Silbert, founder of the multi-billion dollar fund Grayscale, stated that he does not want to own any asset other than BTC in the current situation. The state of El Salvador, which was the first country ever to recognize bitcoin as an official state currency, bought the dip and acquired 500 bitcoins for an average of $30,744.

Michael Saylor, CEO of MicroStrategy, explained in an Investor Relations that Bitcoin would have to fall to $3,562 before the company could no longer cover the existing loans by selling the BTC. Should this rather unrealistic event occur, he still wants to deposit other securities so that he does not have to sell them. The founder of the software giant is not worried about the current Bitcoin crash. MicroStrategy owns nearly 130,000 BTC. Recently, however, the head of the company came under criticism and he was accused of fraud.

The aforementioned reasons are probably why bitcoin is crashing alongside many other cryptocurrencies. However, the greatest influence is certainly the sheer uncertainty of how the market could develop in the coming weeks. The effects of the corona pandemic and the war in Ukraine are not yet fully foreseeable.

But if you look back at the major crises in the global economy, you will notice that there are numerous parallels. In uncertain times, the market always behaves as it is currently doing. So that's not unusual, although history doesn't necessarily have to repeat itself over and over again. Investors should therefore be prepared for negative times, which will, however, turn around again at some point.