Plus500, the company listed on the London stock exchange and fully regulated by the FCA, CySEC and ASIC amongst others. The company recently released its annual report showing record returns as revenue totaled $228.9million compared to 115.1 million in 2013 and $66.5 million Q4 revenues, which represents a record for the company as Plus500 forges strong.

Ever since the company released its record revenue report, its shares have been soaring, as investor confidence in the Israel based firm has been on a high as dividends increase, rising earnings before interest, taxes, depreciation and amortization margins and a positive outlook for the entire fiscal year.

On Wednesday, Plus500 shares hit an all time high of£7.14, before closing at £7.10, surpassing the previous high of the £7.00 level hit in April 2014. This marked a rise of 20.3% in share value ever since the release of its latest revenue report. On aggregate, the company has a market valuation of £815 million ($1.24 billion), putting it a long way above its NYSE-listed parent, Forex.com Gain Capital Holdings Inc. 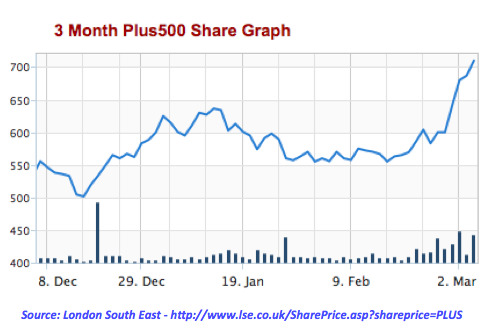 The most notable facts in the company’s financials are highlighted below:

Mr. Gal Haber, the Chief Executive of Plus500, reported the following: “We are delighted to announce another year of strong growth, once again achieving record levels of both revenue and profits with an increase occurring in almost all countries in which we operate. In particular, the Company saw a strong finish to the year as volatility in the financial markets resulted in greater trading on our platform”

Tags Plus500 Plus500 shares revenue reports