Hate speech is increasing on online platforms, which Gab has been known to be a prominent host for, leading to giant companies cutting ties with it.

Against the background of the Pittsburgh’s tragic incident, PayPal has banned the website of Gab from its payment platform.

On Oct. 27th, a gunman had walked into the synagogue of Tree of Life in Pittsburgh in Pennsylvania, and shot eleven people.

After the police apprehended him, the suspect- Robert Bowers, was said to be 46-year-old, with a history of anti-Semitic speech on the social network Gab.

As per The Verge, a PayPal spokesperson confirmed the ban the company imposed, citing the the hate speech Bowers spread on the aforementioned social network as an enough reason for the action.

“The company is diligent in performing reviews and taking account actions. When a site is explicitly allowing the perpetuation of hate, violence or discriminatory intolerance, we take immediate and decisive action”, said the PayPal spokesperson. 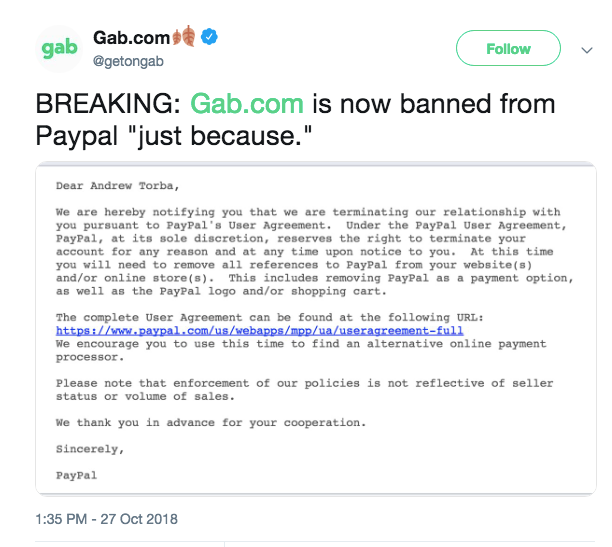 After screenshots of Bowers’ hate speech were revealed by media outlets upon apprehending him, Gab declared in a statement on Medium: “unequivocally disavows and condemns all acts of terrorism and violence”.

Gab -which is reportedly known of welcoming hate speech on its platform- said it reported relevant information to law enforcement officials after it was notified that Bowers had a profile on the site, which it suspended afterwards.

PayPal was considered as a major platform Gab depended on for its continuity.

Apple had refused to host Gab’s app in its iOS store, and Google removed the app from its Play store in August 2017 for violating the company’s hate speech policy.

Microsoft by its turn threatened to remove the site upon noticing a couple of anti-Semitic posts were published on the site earlier this year.

After PayPal’s ban –which analysts say might lead to significant loss Gab could witness- the platform has noticeably emphasised in its Twitter and Facebook posts that it does not allow terrorists on it.

Researchers’ findings refer to that anti-Semitic messaging has increased recently on online platforms.

JPMorgan Bank Accumulates Cash and Does Not Believe in Transitory Inflation

ASIC Extends Relief for Foreign Firms Until 2023
Forex Crypto
Top 5 Forex Brokers
Top 5 Crypto Exchanges
Your subscription could not be saved. Please try again.
Thank you for subscribing. You will be the first to receive all the latest news, updates, and exclusive advice from the AtoZ Markets experts.
Everyone is reading
Ripple Lawyers Object SEC’s Request to Extend Discovery Deadline
SEC Lawsuit Against Ripple May Drag On Until 2022
Ethereum Sustains Below $2,500 Psychological Area - Bears to Push the Price Downside?
close ×